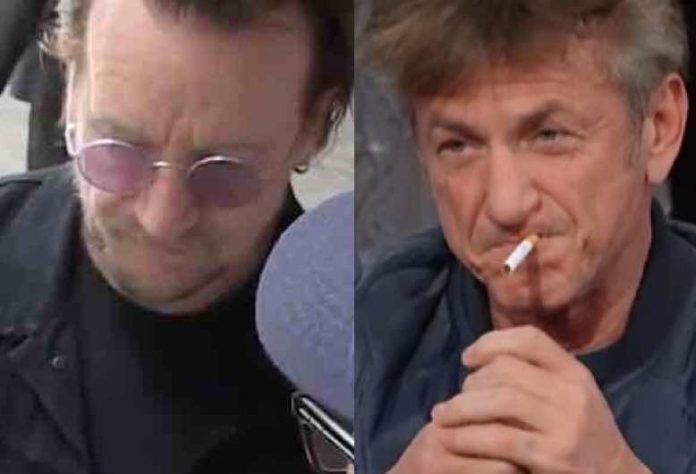 U2 will be surprised by this photo! The cinema-based Twitter account Centro Arte Alameda recently shared this creepy photo of U2 frontman Bono‘s daughter Eve Hewston and A list actor Sean Penn in the highly acclaimed film “A Place to Stay” where they are both starring bizarrely at each other. You can view it below. Bono’s daughter ‘bends over’ in U2 night gown photo.

In other news regarding Eve’s rock star father Bono, fans recently took to social media to reflect upon one of U2’s most classic albums – ‘How To Dismantle An Atomic Bomb’. One fan stated: ” …this one ranks up there with the very best of U2. I have loved the band since *Boy*, and my fave albums were the late 80s albums such as *Unforgettable Fire*, *Joshua Tree*, and *Rattle and Hum*.” The daughter of Bono ‘gets wet’ in bad U2 pool photo.

The fan continued: “While there is much to love in the 1990s catalog, and *All You Can’t Leave Behind* was also a well-done album, this album pulls together all the sounds that have helped define U2 and its transitions over the years. This the cleanest, best package I’ve heard since *Joshua Tree*. Bono found his best poetry again (maybe the return this year of that case of lyrics lost so long ago was providential), the Edge is tight, and, as always, Adam and Larry provide the bass/percussion foundation that has made this band so consistently good for 25 years. And they have finally made an art of drawing on other musical influences while still sounding like U2, not imitative. They came close with *New York* on the last album, but they’ve done an even better job here.”

The user concluded: “This is a fine work to usher one of the legendary Rock and Roll Bands into the Hall of Fame next year. And the best part is they are still making some of their best music – something that doesn’t always apply to Hall of Famers.” U2 singer Bono stunned by ‘terminal diagnosis’.