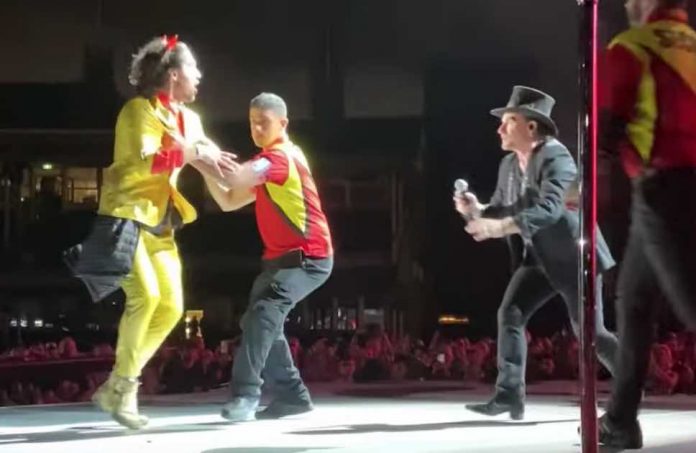 This certain U2 fan certainly found what he was looking for during Bono and company’s most recent show in Sydney, Australia. During the show, weirdly enough, Bono seemed to motion to the fan who came up to the stage who gleefully dance with the U2 frontman. However, shortly afterward, security initially rushed the stage. Bono was recently ripped for ‘trainwreck’ U2 performance.

We cannot confirm or deny whether or not this was event was staged, however, security disappeared off the stage as soon as they appeared so it wouldn’t come as a surprise if they simply weren’t privy to the pre-planned event. You can view the video below.

In other news regarding U2 and Bono fans of the popular rock band discussed the legacy and impact of U2’s latest hit ‘You’re the Best Thing About Me’ off of the album of the same name. Bono newly ranted at U2 show after rain hits him onstage.

Han_dies_01 said: “I actually love this song. I still think that this is a song about the US / “America” disguised as a love song to Ali. OR at the very least (like many U2 songs) the lyrical ambiguity is intentional to allow it to apply to both. Given the references to the US in Get Out of Your Own Way and the direct address to the US in American Soul, I wouldn’t be surprised if You’re the Best Thing About Me was intended, at least partially, to reference Bono’s (or the band’s) growing unease about the US.

The fact that the video is staged as the band hanging out in / enjoying New York, to me, further supports that interpretation.

Whereas TiredHands put: “I like the final version, but the Kygo version is the best, especially that first version he played live. It was just fantastic. Better lyrics. I honestly think if that version had been released during the Summer, it could have been a pretty big hit for them.” Bono recently revealed how much U2 bandmates are paid.