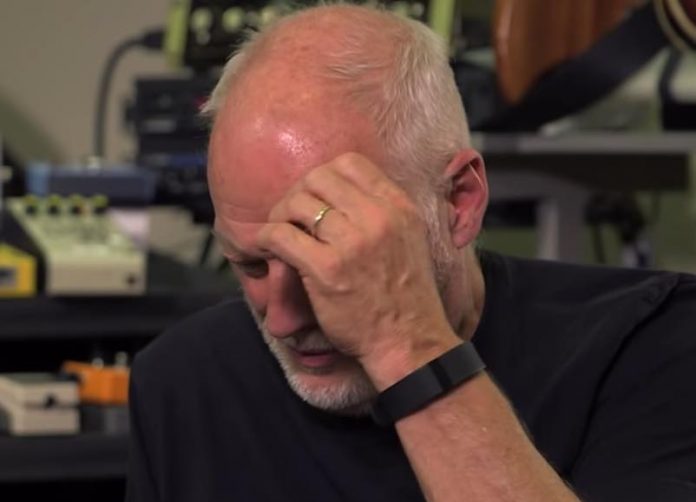 Pink Floyd singer/guitarist David Gilmour discussed his feud with Roger Waters on The Lost Art of Conversation with Matt Everitt. A Pink Floyd member reacted to a small crowd at a show recently.

He said about their dynamic and creative chemistry, and how it ultimately led to Waters leaving. “The Roger and me thing? I would think of myself as more of a melodic type and Roger is more of an aggressive wordsmith.”

Gilmour also discussed producer Bob Ezrin, “Bob’s a very good driving force. You could say brutally honest with his opinions and he wouldn’t let you get away with anything that isn’t up to the standard you set yourself.”

He later said about Waters quitting Pink Floyd in the early 80’s, “I had been working for some time in the studio, but what was going to happen was in the air for a long time while Roger decided whether he was going to f*** off into the ether or not.”

He said he discussed moving on without Waters with drummer Nick Mason in the summer of 1986. Gilmour recalled, “I asked him if he fancied coming in and doing some work and he was quite keen on the idea.”

Roger Waters turning down a stunning Pink Floyd offer was recently detailed. Popik34 recently asked on Reddit, “Question: Is there going to be box set for 1972-1987? We’ve got The Early Years and now The Later Years. Did they mention if they plan on making The Middle Years?

LobotHead responded, “Immersion sets (2011-2012) cover Dark Side, Wywh and The Wall. There are original and alternative mixes, live audios, some unreleased stuff etc. Also concert screen films in the best quality. There’s not much to add to it, unless they’ve found some real live videos and restored them in fair quality.

However, Aubrey (Po) Powell has just confirmed in one of the interviews they’ve had some talk about The Middle Years. Not much known so far. Immersions were EMI thing, now Floyd have Pink Floyd Records with other companies distributing the products. Citing Discogs – ‘While Parlophone/Warner Music continues to distribute the band’s back catalogue in Europe, international rights belong to Sony Music Entertainment.'”

Keyboardtyler57 chimed in, “That’s what I had questions myself, there’s the early and late early, but that gap is missing, to be honest what else can we get, demos? The original wish you were here album with raving and drooling.” Roger Waters called out a Pink Floyd ‘monster’ recently.