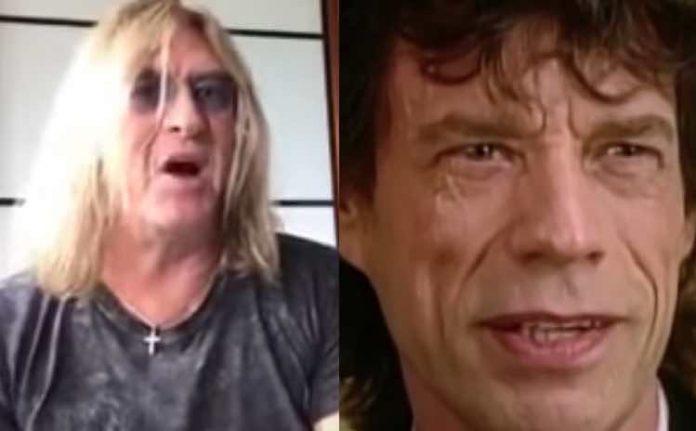 Elliott said, “That’s a great deep cut. It’s from that period just before they became this properly nasty rock’n’roll band with Beggar’s Banquet and all that. It’s one of Brian Jones’s songs, and it’s got all these angular chords where the root note is very gospel against the harpsichord and the sitar.

I love Jagger’s vocal performance. He sounds like he’s wearing a cravat and has a gin and tonic in his hand. Although they were snotty little gits, they definitely had an air of Lord Byron about them. The Beatles originally looked kind of posher, but they were a lot rougher than the Stones.”

Motley Crue unloaded on Def Leppard disrespect last week. Baxtula posted on Reddit about Def Leppard’s latest tour, “Def Leppard thinks the First Ontario Center Stinks. Saw this a few months back and debated about putting this up here to avoid reading lame comments that Def Leppard sucks, etc, but I guess it’s a timely topic. Def Leppard has been doing vlog from where they play. In this video (within the first minute), you can hear Joe Elliott’s comments on what he thinks of Copps Coliseum or whatever it’s called now. Kinda comical, (contains some naughty words).”

RoberttheLoyalistCentral responded, “He means the building literally smells like dirty humans. Looks like they use the locker rooms as the bands private area.”

JMoney2106 chimed in, “Renovating won’t do it. It’s primary function is acting as a home arena to an OHL team and it’s not economically viable for them even with renovations. They need to tear it down and replace it with a 5,000 seat arena with modern amenities that can be converted for concerts etc as needed.”

VoltrondemortWestdale said, “That’s a hundred million dollars of taxpayer money for an OHL team. If it’s not worth keeping in its current state, just tear it down and sell it to a developer.”

JMoney2106 wrote, “I never said that taxpayers should pay for it, you did. I was simply saying what needed to be done to make it economically viable.”

DearnessKirkendall commented, “I’m completely behind the city not supporting the redevelopment of Lime Ridge mall to accomodate an arena. Do you know if there’s some reason the west harbour lands that would have been used for the stadium build were ruled out? Seems like it would fit with the city’s desire to keep entertainment venues downtown, and provide enough space for new arena. Perhaps the developer/Bulldogs owner rejected the site for some reason?”

You can read the full Joe Elliott piece at Louder Sound.