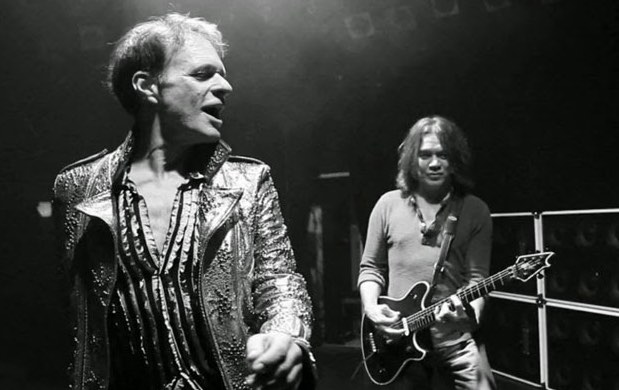 Van Halen singer David Lee Roth will have guitarists playing the role of Eddie Van Halen on his upcoming Las Vegas run of shows, and later opening for KISS in North America. The big star though will be Al Estrada, according to VHLinks.com, who is joining the DLR band as part of a last minute lineup change. Michael Anthony discussed 2020 tour plans with a Van Halen bandmate a few days ago.

T.B. posted, “Someone correct me if I’m wrong, but didn’t Roth fire some or all of the band in the rehearsal clip after a lot of negative feedback and bring in some new guys?”

Bklynboy68 shot back, “Yes he did. He added two killer guitarists but I don’t know of any more changes. Darrin might know.”

vhin04 commented, “I think Al Estrada is one of the new guitarists. That should be a big improvement over that garbage that he had in that promo clip but I’m still not interested in this Dave tour. Highly unlikely that Mike shows up for a guest spot.”

EJC said, “Al Estrada is world class…. Im going to post a vid of him doing something other than VH because he is more than just a VH guy… He also has a Journey tribute band, and Hendrix band.”

Darkness posted about Michael Anthony possibly reuniting with David Lee Roth in Las Vegas, “Mike used to jam with Sammy on stage all the time before they were in bands together again. Roth clearly wanted Mike back in VH, and now that it seems that VH are done and were even considering playing with Mike again anyway, what are the chances Mike gets up on stage with David for a song or two?”

Mike Zack responded, “If there was indeed a tour in the works with Mike at some point last year I can see this happening. I think it would be a great move by Dave!”

Scott chimed in, “During the Sam / Dave tour, Mike pleaded with Dave to do stuff on stage together, and Dave didn’t bite, no idea why…so while that would be amazing to see, its doubtful it’ll happen.”

Mike Zack wrote, “20 years ago now. At the time if Dave did that he knew it would piss off Ed. Now I don’t think he cares as much and if Ed was at any point willing to tour with Mike last year, he won’t care about this.” Sammy Hagar saddened Alex Van Halen fans a few days ago.