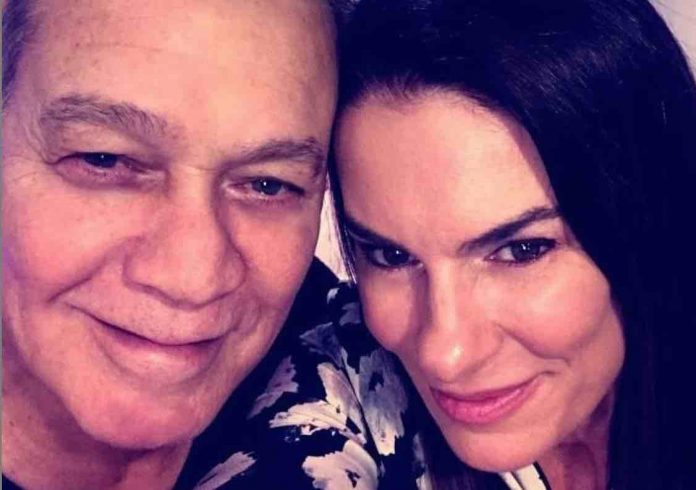 Eddie Van Halen‘s wife Janie reacted to a fan thinking that just because she has a dance partner, it means her marriage with Eddie is threatened, despite the fact that they are very happily married and have been for years. Eddie’s too busy rocking out on guitar to be dancing the night away, so it’s always good to have a friend who can be a dance partner.

Janie announced, “You can now follow my dance partner and pro wrestling cohort Louie Martinez and I at our official accts on Twitter, Facebook, Instagram and YouTube at @janieandlouie for all our dance, wrestling and every day life adventures. #ballroomdancers #ProWrestling #pushingpast40.”

A fan named David responded, “I’m kinda curious what Ed thinks of all this ?? Lots of exposure without the hubby. Just wondering 😏.”

Another fan named CBRLTWPMluvsMCS shot back, “oh no…NOT WHAT U THINK…IM ALSO A DANCER AND MARRIED…when u have dancing partners…its NO THREAT AT ALL TO ANY LOVER or relationship…never is a problem.” Janie said in response, “Exactly.” You can support Janie and Louie in their dancing and wrestling performances @JanieAndLouie on Twitter.

A Van Halen member trolled fans earlier this week with a ‘2020 lineup’ photo. Eddie Van Halen has been back in the news with Billie Eilish recently stating she has never heard of him. Noise Next Door posted on VHLinks.com about the story, “I was reading Bob Lefsetz’s blog over the weekend, and he summed this whole thing up so perfectly.

He blamed this all on the fact that Rock music has been so terrible for so long and the younger generations have had no exposure to any quality music within this specific style/genre… and he 100% right.

Rock music has 99% sucked since around the early 90’s. Alt-rock has been groundbreaking, but music with high gain Plexi’s and big drum reverb has mysteriously disappeared from our culture.”

RRVH1 said, “I was at the beer store the other day… Tattooed older guy in front of me turns around and comments on my guitar pick necklace (made from a drummer’s cymbal, and made to commemorate an old fallen friend). We chat music. No mention of the VH logo necklace I’m also wearing… The female cutie behind the till doesn’t comment on either.

Short of folks on here grooming their children to listen to ‘our’ music? Kids don’t know and don’t care about VH, by and large. Not breaking news, just a real life experience of mine from two days ago.” Adam Sandler made a bold Eddie Van Halen claim last week.