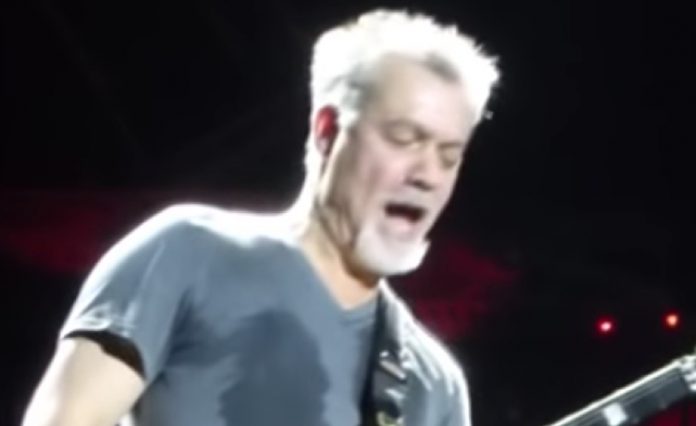 Van Halen singer David Lee Roth said a couple of weeks ago on the radio that he has heard the ‘rumors’ everyone has about Eddie Van Halen’s health, but would not discuss it further. Yesterday, Michael Anthony echoed Roth’s sentiments, as he also did not shoot down the illness reports. Eddie Van Halen’s family has yet to directly respond to the rumors, but a few months ago his lovely wife Janie Van Halen posted a photo on Twitter about how to deal with a struggle, though it easily could be totally unrelated to any rumored issues surrounding Eddie.

She posted, “Within you is the power to rise above any situation or struggle, and transform into the Brightest, Strongest version of you EVER!”

“Being one of the few that are still upright at my age is quite the honor. Half the thing that makes me so healthy and so vibrant and able to do things that I did when I was 40 is because I’m happy to do them. I don’t have to do things that I’m not happy to do. Some people have to work, you have do this and and that, and I’m not dogging that — I’m just saying it makes my life so much easier, it makes me so happy, because I don’t have anything to complain about. I’m not miserable, ever.

Eddie Van Halen was caught on video by a rude fan in a newly resurfaced video. Hagar added, “It’s great — it’s good to be me [Laughs]… I say no to so many things, you wouldn’t believe it. Everybody thinks that I must just do everything that comes along, but I say no to so many things because I think, ‘Ah, that’s not going to be enough fun.’ Everything I’m doing is really because it’s fun, and it does keep me alive. It’s things I want to do. I think that if I stopped and tried to retire and slow down, number one, I would be bored to death.

My wife would probably kick me out of the house, and we’d probably have to live in separate houses. When I’m busy, I’m the best, and my energy stays up and I don’t start getting insecure and thinking about other things, and then I don’t start daydreaming. I’m a real daydreaming, creative person, and if you give me five minutes off, I’ll start a new damn business.” You can read the full Sammy Hagar interview at OC Weekly.