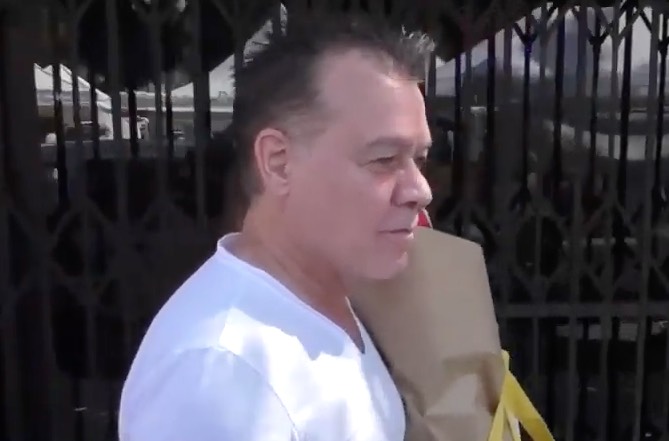 A never before seen brief Eddie Van Halen video interview filmed in 2017 was just posted, and it sees Eddie in good spirits. The video title though is vague and was oddly posted just a couple of days after David Lee Roth and Eddie Trunk made cryptic remarks about him possibly suffering from an ailment that led to the Van Halen reunion tour with Michael Anthony falling through. Alternative Nation transcribed the video.

Interviewer: Hey Eddie, I’ve got to start off by apologizing to you. When I was 13 I bought a bootleg Van Halen shirt, because I couldn’t afford to main shirt. Because you had to be cool, if you didn’t have a Van Halen shirt, you weren’t cool back then, so I have to apologize for that.

Interviewer: No, but I own your shoes, and your son’s shoes from the LAPD charity golf tournament, I was the one who bought them.

Interviewer: Why is it when you play guitar, why is it when the greats like you, I consider you the greatest guitar player ever. Why is it that you guys do the animated faces when you’re playing?

Eddie: I don’t think about it when I do it.

Interviewer: I consider you the greatest. (An Eddie Van Halen disease ‘treatment’ claim was recently made by a radio personality.)

Interviewer: Who do you consider the greatest?

Eddie: I think everybody is great really. It’s self-expression, I don’t think that anybody is better than anybody else.

Interviewer: Did you have an inspiration when you were growing up?

Eddie: Clapton was my hero, even though I couldn’t play like him.

Eddie: Have a good day.

The vague title led to confusion on the VHLinks.com forums, with Jesus H. Christ posting, “I don’t know….Ed looks pretty healthy in this video.”

Van Squalen responded and called the fan rude, “That was 2 years ago, we figure. And that dude is such a douche for buggin him like that, then uploading the vid to the net. Privacy. Ughh.” Eddie Trunk revealed he was sent a new photo of Eddie Van Halen at a restaurant bar.