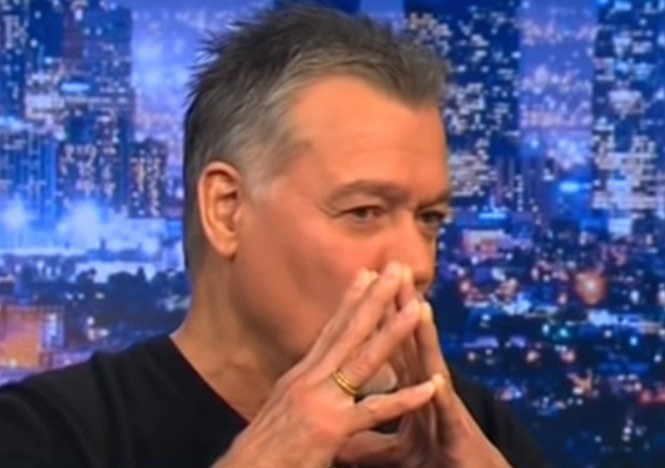 BREAKING UPDATE: A new photo of Eddie Van Halen at a restaurant/bar has leaked to a big name.

Van Halen frontman David Lee Roth finally addressed rumors about the health of Eddie Van Halen yesterday in a KSLX radio interview, saying he ‘hears all the same rumors you do, and it’s not my place to guess.’ Fans have been concerned since a Van Halen reunion tour was canceled before it was even announced. Wolfgang Van Halen revealed if Eddie ‘killed’ his career earlier this week. Eddie Van Halen has now broken his silence with his first social media post since Roth’s remarks, writing on Saturday, “On this day in 1984, Van Halen won Best Stage Performance In A Video for ‘Jump’ at the first ever MTV Video Music Awards held at Radio City Music Hall! #music #musicvideo #vanhalen #eddievanhalen #evh #classicrock #rock #rockmusic #rocknroll #mtv #mtvvideomusicawards #september #radiocitymusichall #guitar #guitarist #video #saturday.”

Michael Anthony confirmed in the spring that there were plans for the original lineup to convene for their first performances together since 1984 in July 2019, but that after talks with Van Halen’s manager and David Lee Roth’s business manager, plans fell through without any explanation. Michael Anthony recently revealed how Eddie Van Halen is looking, and if it’s bad.

David Lee Roth had hinted at the tour as well in a December 2018 interview. Roth discussed his own health in a new Van Halen News Desk interview, saying that his 4-year break from performing has been ‘paralyzing’ and that after X-rays at the hospital he saw he has an older body on the inside than his great physique and good looks would make you think.

“Four summers have gone by. And for a singer, that’s paralyzing. Like a boxer, or a tap dancer, I am dependent upon my whole rig. My Whole body. Perhaps playing a guitar, or piano, for example, with your hands, is a bit more forgiving over the years. If you can watch me now, I’m 65 going on 23. If you see my X-rays, I’m 65 going on 80. [Laughs]

I’ve paid a price for the time off, frankly. Enough said there. I hope the best for the fellas. But I don’t know what’s coming up with Van Halen. It’s time for me to use whatever talents and skills that I have. I’m betting’ the rent on it. You’re going to have a ball. This is the smile that launched a thousand hips.” You can read the full interview at VHND.

David Lee Roth also told KSLX yesterday, “I’m the face of Van Halen from this point on, most likely. I’m not sure what’s happening with Ed, but he’s probably not gonna answer the bell this time. And it’s not my place to guess. But we’ve been in touch. The fellows who I’m working with in terms of my road crew and the amps come from Van Halen.” A Van Halen icon savagely mocked Keith Richards yesterday.