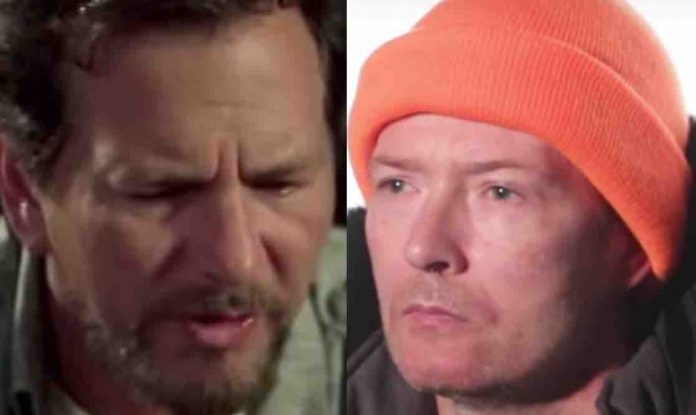 Howard Stern finally interviewed Pearl Jam singer Eddie Vedder on his show on Monday for the first time. Alternative Nation has recapped some of the interview. Stern interviewed late Stone Temple Pilots singer Scott Weiland frequently on his show, with Weiland even calling Stern for his birthday when he was in jail in 2000. Billy Corgan detailed his relationship with Scott Weiland last week.

Stern discussed his love of Weiland when interviewing Pearl Jam frontman Eddie Vedder for the first time on Monday, with this being the first time Vedder was asked about Weiland since his December 2015 death. Stern said he never met Weiland before he died, and didn’t know him. Vedder said, “It’s a shame. No, I never met him.”

Stern asked Vedder an interesting line of questions he has probably never been asked, even asking Eddie if he considered himself to be handsome!

Howard said you ‘have to be a good looking guy’ to be a singer in a band. Stern also said he felt ‘cool’ in the 90’s playing Pearl Jam and Stone Temple Pilots. Stern said Weiland was ‘good looking’ and charismatic.

Vedder said he has struggled with Chris Cornell’s death, and that he has dealt with denial and being ‘scared’ of facing that fact that he is gone. Eddie said losing his brother a few years ago as well as painful. Eddie recently discussed missing a big Temple of the Dog show.

He also said about what he is doing currently, “Whatever I’m doing, I’m just trying to get better. I feel like I’ve got more work to do, and I need more time.”