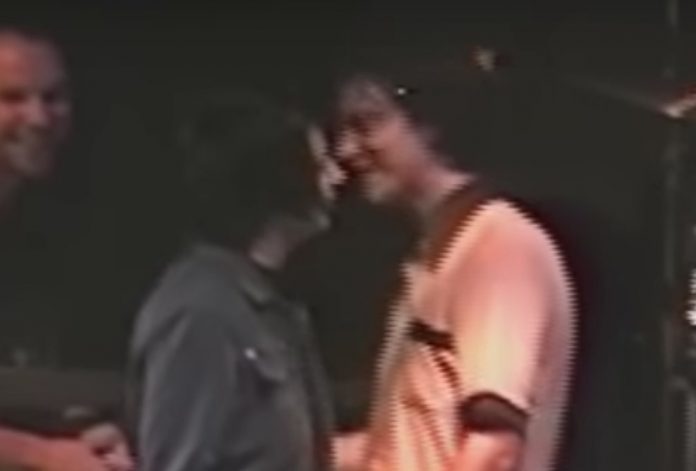 Pearl Jam frontman Eddie Vedder’s ex-wife Beth Liebling is finally breaking her silence and returning the music. Beth, who played in Hovercraft, has announced the debut album with her band Teleportal called Devour, set for release on October 18th. The album was recorded with Doug McBride, who worked on early recordings for The Smashing Pumpkins album Mellon Collie and the Infinite Sadness. Eddie Vedder was photographed by the new Soundgarden album earlier this week.

Eddie Vedder making a painful The Who revelation was detailed a few days ago. Eddie Vedder and Beth Liebling playing together in Hovercraft was documented in the 1996 Grunge documentary Hype! They toured with Mike Watt and Foo Fighters in 1995, with Vedder trying to keep his identity secret. Vedder and Liebling got married in Rome, Italy in 1994, after having been together since 1983. They divorced in September 2000. Hovercraft also disbanded around the same time, with Liebling taking a hiatus from the music business.

Vedder briefly discussed the divorce in a 2006 Rolling Stone interview, “We move on to another tough subject: the 2000 breakup of Vedder’s marriage to Beth Liebling, whom he had dated since he was a teenager. He won’t explain the split, but he does say that he was devastated.

The divorce happened around the same time as the biggest tragedy of Pearl Jam’s career: Nine young fans were crushed to death on June 30th that year during a set at the Roskilde Festival in Denmark. ‘You can imagine what kind of fetal position I was in,’ he says. ‘I just remember thinking that there was no way out. I was listening to The Who by Numbers and there’s a line in ‘Slip Kid’ – ‘There’s no easy way to be free.’ I was thinking, ‘I couldn’t agree with you more.’” Eddie Vedder’s wife revealed a massive paycheck for a great cause last week.

Posted by Teleportal on Thursday, March 8, 2018