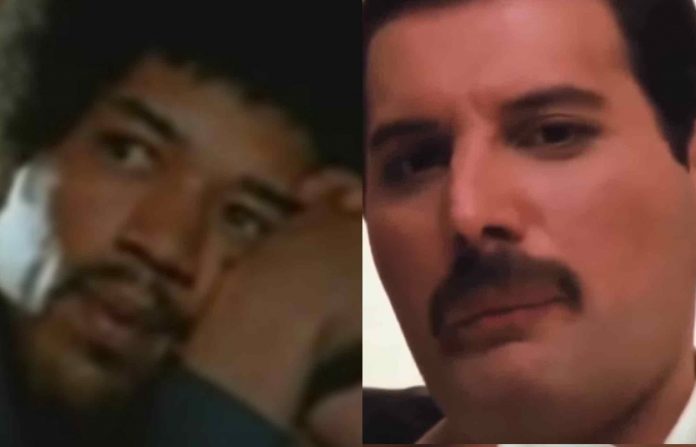 Queen guitarist Brian May revealed in a new interview that Freddie Mercury considered Jimi Hendrix a god, which may be offensive to some religious people, and awesome to others. Just yesterday, KISS icon Gene Simmons made a stunning Freddie Mercury revelation.

May was asked by Guitar World, “Queen also seemed to occupy their own lane. You weren’t doing the blues thing like Free, and you weren’t aggressively prog like Yes and Emerson, Lake & Palmer. Were you guys trying to stay away from what everybody else was doing?”

He responded, “I think the real influence is from all of those things. A couple of songs in our early days were very much modeled on the way Free wrote. By that time I’d been exposed to Eric Clapton and Jimi Hendrix, and that was life-changing. To us, Hendrix was the great god. I still can’t understand where that stuff came from. It’s like he came from another planet.

I mentioned harmonies — I came from Buddy Holly and the Crickets, the Everly Brothers, the Beatles. The Beatles built our bible as far as musical composition, arrangement and production went. The White Album is a complete catalog of how you should use a studio to build songs. ‘Happiness Is a Warm Gun’ and ‘Dear Prudence’ are blinding examples of how music can be like painting a picture on a canvas. In a sense, the Beatles were unburdened because they didn’t have to play the songs live. We became passionate about building stuff in the studio but also making it come to life on a stage.”