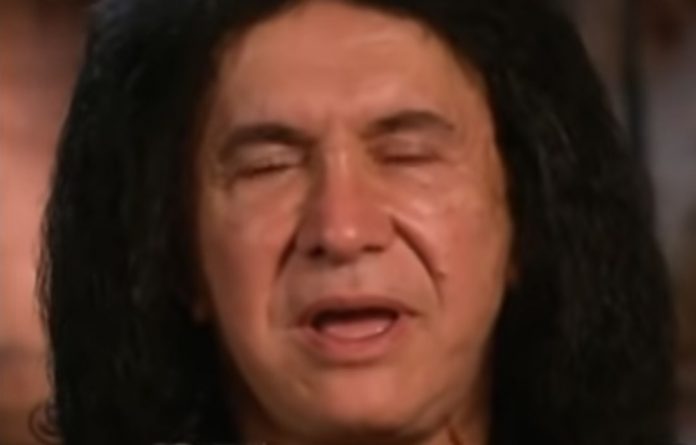 KISS members Gene Simmons and Paul Stanley were brutally attacked verbally by Sammy Hagar backstage at a show after his band opened for them. Hagar told the story in the new book No Encore by Drew Fortune. A sad video of Gene Simmons at the hospital last week was uploaded.

“Gene and Paul were standing backstage, as they had heard all the commotion and wanted to know what the fuck was going on. Bill Graham, God bless him, was in New York on his way to the airport. He heard on the radio that I had been added to the KISS show, so he had told the driver to turn around and take him to the show. So he’s backstage and had just walked in during my meltdown. He’s shaking his head, and his hand is covering his face. Gene and Paul were doing the exact same thing.

I unloaded on them, too, saying, ‘Fuck you guys too!’ And that was it. I didn’t do any more shows with KISS. I stomped away to my dressing room. Paul was saying, ‘You can’t talk to people like that, man! You gotta go out and prove yourself. You can’t do it like that.’ I’m still going, ‘Fuck you and your makeup and your fans!’ Bill Graham was in my face, but I was furious.

That night almost made me want to quit the business. It was humiliating and disheartening, and my poor band didn’t know what to do. One of the guys, my rhythm guitarist who was the newest to the band, quit after that show.”

KISS wrapped up their European tour a couple of weeks ago in Glasgow, Scotland. EggFlip posted on KISSfaq.com, “It appeared a lot of people there that only knew two or three songs (very few people got off their chairs outside of the floor area). But really want the band’s fault who were way better than I could have imagined. Paul was singing quite a bit without a tape as his voice was clearly failing at time but it didn’t matter. Those guys are inspirational at their age doing that.

Psycho Circus worked strangely really well. I would have dropped War Machine (as much as I love the tune) and 100 Thousand Years they seem to loose the audience. I would have had Strutter and I Stole You Love for sure in the set and for UK audiences they should have done God Gave Rock N Roll To You. I would have liked another ballad. Maybe I Still Love You.

But overall amazing night just a shame not full of die hards.” Gene Simmons made an embarrassing Slash revelation a few weeks ago.