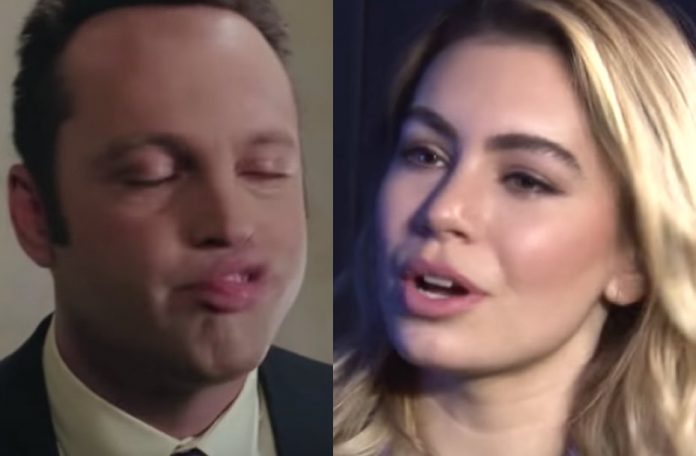 Gene Simmons’ daughter, the dazzling Sophie Simmons can be seen schmoozing with Hollywood’s best and brightest. Here, Simmons can be seen side by side with A-list Hollywood actor Vince Vaughn as part of the World Poker Tour’s ‘Four Kings & an Ace” to benefit Mending Kids International in Beverly Hills, California. This KISS icon recently claimed Gene Simmons is lying about retirement.

Simmons looks simply ravishing in this simple yet elegant black dress with her makeup and hair looking extremely tastefully done as well.

In other news regarding Sophie’s father, Gene, fans of the KISS elder took to social media to reflect on Gene Simmons’ classic 1978 self-titled solo album. One reviewer noted: “Gene Simmons’ first solo album is awesome. It features eleven songs, and features guest artists, including (but not limited to), Joe Perry, Cher, and Bob Seger! I noticed that every one of KISS’ solo albums does at least one cover of another artist. I can’t remember Paul Stanley’s cover, but I know Peter Criss covered “Tossin’ And Turnin'” and Ace Frehley covered “New York Groove”. Gene Simmons steps it up by a lot! He covers “See You In Your Dreams” by KISS! He also covers a Walt Disney classic, “When You Wish Upon A Star” since he widely credits Disney for being instrumental in helping him learn English (Gene was originally from Israel). You truly won’t be disappointed. This KISS member revealed if Gene Simmons uses drugs.

Whereas another reviewer said: “‘I’ve always had this album on vinyl, and now I finally got the CD. I think this album is the most inspired one out of the four solo albums KISS made.”

The reviewer continued: “This is a very special album because it doesn’t really sound like KISS or something you’d expect from Gene [Simmons], but the songs are great. Some of the songs sounds like a Beatles tunes (see you tonite,always near you,man of 1000 faces). I rated this album 5/5 because i simply love it. my least faves are ‘wish upon a star’ and ‘living in sin’ but the rest of the album is amazing. my favorite songs are probably Mr. Make Believe and See You Tonite.”