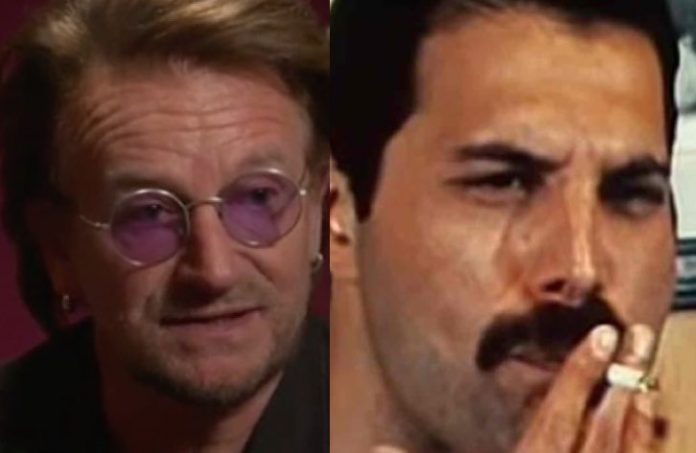 U2 frontman Bono along with the group’s lead guitarist, The Edge with recently gave an interview with India based outlet NDTV in which the iconic U2 members discussed a wide variety of topics at length. Here, the iconic U2 members discussed playing the 1985 benefit show Live Aid which Freddie Mercury and Queen which also famously played. Bono was recently driven to tears at heartbreaking U2 concert.

In addition, Bono states during this interview how he felt he had originally ‘blown’ their performance set but ultimately felt while people think about their performance and Queen’s the most, it was ‘their audience’ that night. Alternative Nation transcribed their comments. Bono was recently stunned by U2 fan rushing stage in video.

The Edge: What I remember, the lesson from me from [playing] Live Aid was sometimes what you get in a situation that might be better than what you were anticipating or what you planned. Yet, you got to be awake to that fact. So in this instance, our plan was very different from what happened on stage. We were freaked out, a little disappointed because we thought we’d thought we kind of have blown it. Whereas in fact, looking back what we ended up acheving that even was way better than what we planned. It took us a little while to figure that out so in the immediate aftermath after the show we were in the dressing room we were like, ‘wow what happened? That didn’t go the way we had expected.’

Bono: It’s funny the two bands that people seem to gravitate to all those years ago on that day, in particular, were Queen and our band. Yet, Queen was very famous and we were not, we were just coming through. But I felt in the audience, I felt it was our audience. A ‘trainwreck’ U2 and Bono performance was ripped a couple of days ago.