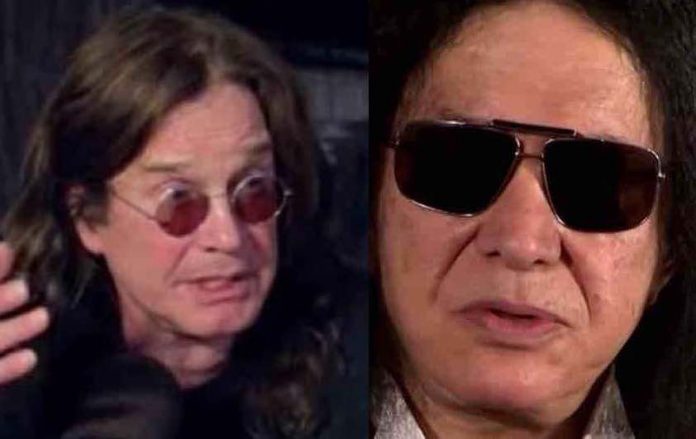 Iconic KISS bassist Gene Simmons recently took to social media via Twitter to showcase this Ozzy Osbourne magazine cover in which he is one of many famous 80s era rockers to make the cut in this special ’80s issue’ of Metal Hammer magazine. Bizarrely enough, Osbourne looks like a zombie on the cover, which you can view below. Dave Grohl reveals ‘very sick’ Ozzy Osbourne photo.

In other news regarding Ozzy Osbourne, Osbourne recently opened up regarding his relationship with acclaimed Black Sabbath member Tony Iommi in a new interview on Rick Rubin’s ‘Broken Record’ podcast. “The Prince of Darkness” stated: “People will say to me, ‘Why did you always sing on the side of the stage?’ I don’t ******* know. I don’t know,” he said. “It’s just fear, I suppose. ‘Cause Tony, he’s one of the few people who could walk into this room right now and I would ******* feel intimidated. He intimidates the **** out of me — and he knows it.” Ozzy Osbourne ‘loses voice’ at comeback performance.

Osbourne then continued, mentioning how disappointed he was that Bill Ward didn’t have any involvement of ’13’, telling Rubin: “The only sad thing about the album was Bill wasn’t playing [on it]. We would have been still doing the ******* album now. … He takes so much time over everything.” Osbourne later proclaimed: “Tony said to me one day, he said, ‘You know Bill’s trouble — he still thinks everybody’s gonna rip him off,’ which I get. I ain’t no better than Bill, or any of ’em, and I’m lucky to have a wife that’s on my side. ‘Cause these *******, man, they come in and they give you all this ********, drive you around in a flashy car, show you a bit of money. And you can sue them, but it takes you a ******* lifetime to win. The lawyers win. Sharon’s father was a renowned ******* ripoff artist.”

Michael Jackson daughter leaks bad Ozzy Osbourne insult. ‘The Prince of Darkness’ then concluded: “We got stung for a lot of cash but there again, I said to Bill Ward one day on the phone, a while ago now, I said, ‘You know what? In a way, as far as I’m concerned, it was a blessing that I never got all that cash up front, ’cause with what cash I had, I’d done a good job of nearly killing myself.’ I wouldn’t be sitting here, and that’s for sure. If had got all the millions upfront, we would have been ******* dead.”