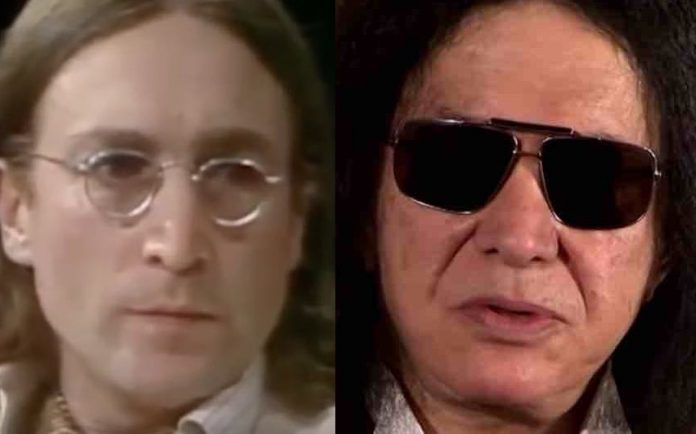 “This country couldn’t touch the bootheels of UK acts like the Stones, the Beatles and Queen. But it is an enormous country and so many people from elsewhere have arrived and reached heights they never could have done at home. Could I have achieved as much in Israel? No. There’s a ceiling in almost every country in the world that you just can’t go beyond. Not here.”

John Lennon making an angry shooting remark was revealed a few days ago. KISS performing on WCW Monday Night in 1999 was discussed on this week’s episode of the WHW Monday podcast hosted by Tony Schiavone.

DJ Sterling Golden on KISSfaq.com posted, “It will likely be this: 36 BlueChew references that refer to Tony’s Love Gun…Tony giving some random KISS memories while [co-host] Conrad [Thompson] shits on the band (he only likes War Machine)…Tony randomly slobbering over the ladies onscreen…And once the watchalong is done they’ll probably direct listeners to watch the KISS performance on YouTube and go from there.

There is some excellent footage out there of KISS meeting the Hulkster and a bunch of personnel, wrestlers etc. Would love to see all that surface in mint.”

He added that the KISS performance was edited out of the Nitro episode on the WWE Network version of the show, likely due to licensing reasons, “Listening right now. So far it sounds like they frontloaded the show with KISS talk and then they go into their watchalong to compensate for the edits.” Gene Simmons recently filmed a video of his daughter dancing.

Simmons’ comments are from a new Evening Standard interview.