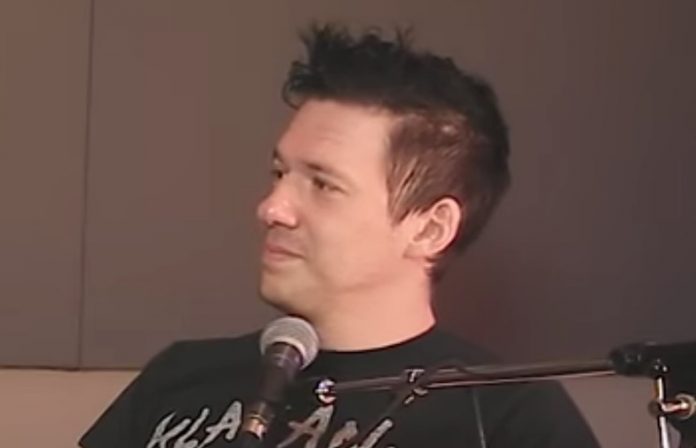 A female Ghost fan page has revealed a new photo of Tobias Forge‘s backside. Sisters of Sin tweeted, “One of the better shots we’ve seen 😉.” You can also view videos below of Ghost opening for Metallica in Moscow. Tobias Forge recently made a bold claim about who made it possible for Ghost and Marilyn Manson to have a career.

Ghost fans on Reddit recently discussed the relationship between Copia and the Papas.

Relic827 wrote, “So I’m still sort of new to the band. Is there a story as to why the lead character of the band changes with each album/era? I get that the 3 Papas are grandfather, father, and son (I’m assuming anyway), but where does Copia fit in? Is he just some Cardinal with aspirations to take over the church from the Papas or something? Am I reading too much into this? Am I asking too many questions?”

Monster-1313 responded, “Papa 1-3 are the sons of Papa Nihil. Papa 3 being younger than Papa 2 by 3 months. Papa Nihil must get around. With each album Ghost attempts to takeover the world. Overthrow churches and governments in the name of Satan. Papa 1 failed so in came Papa 2 and 3 and so forth. Papa 3 came pretty close. Meliora was a huge hit and won a Grammy but still not good enough.

Out of prodigy Nihil and the church turned to the next highest member, Cardinal Copia. So now we will see if the Cardinal has what it takes to earn Papa status. Although some theorize that Copia is the secret love child of Sister Imperator and Nihil. In short, the change of characters each album keeps things fun, fresh and advances the story. Gives each album a different feeling and era.”

Tobias Forge recently made a sad Jimi Hendrix remark. zenithlover chimed in, “ATM, I don’t know as anyone but Tobias (and, of course, Sister Imperator and perhaps Papa Nihil) know exactly how Copia is or is not related to the rest of the Papas. That question has been floating around here ever since Copia first showed up, so you have a lot of company!

As for why the lead character changes with each cycle, in my book a) it makes it more fun, and b) it lets each album have a different theme to a degree it might not if they lead were always the same. I’m sure TF has a lot of other reasons, as well, but those are the top two that come to my little mind.”