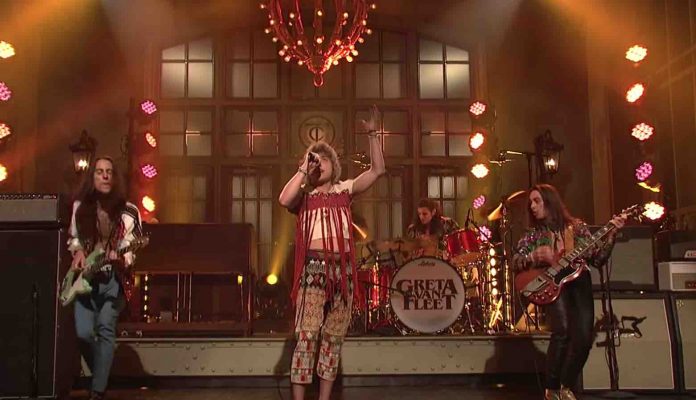 A Greta Van Fleet female fan named liv123 has revealed in new photos that she is a lookalike of bassist Sam Kiszka. She tweeted, “For all intents and purposes, I am Sam Kiszka @GretaVanFleet.” Greta Van Fleet singer Josh Kiszka looked miserable in a photo a few days ago.

orange_joe279 posted, “Anyone else think Greta sounds more like Rush than Led Zeppelin? Call me crazy…but I think that because Led Zeppelin is so much more wide spread and popular, people, mostly the internet, latched onto them so people understood what they were saying. Someone who doesn’t know about rock n roll would so much more likely recognize Led Zeppelin over Rush. Rush is more niche and ahead of its time. I hear so much more Geddy Lee than Robert Plant in Josh. Call me crazy down in the comments I guess.”

Greta Van Fleet also recently revealed a huge AC/DC secret. Hypatiaslibrary commented, “To be honest, Rush was my first thought when I listened to Highway Tune for the first time. I still think Josh’s voice is more similar to Geddy Lee than Robert Plant — maybe more nasal somehow? I can see the Led Zeppelin comparisons in other aspects, but voice-wise he’s more Rush.”

jtkthomas chimed in, “Hasn’t Jake said something about being a big Rush fan? Because if so, it’s not surprising that there’s a clear Rush influence.

In a lot of ways, I think Jake is mostly in charge of the sound of the band. He’s the brother who started it in the first place, and the one who has been playing music for his entire life. He’s mentioned that he likes Jimmy Page, Jimi Hendrix, and Eric Clapton, and all of those influences are there.

Aesthetically, Josh does exude a lot of Plant c. Zeppelin days. But sound wise, I really don’t think it’s accurate to ONLY focus on comparing them to Zeppelin.

And anyway, I’m willing to bet that the people who think they sound like a copy of Zeppelin have only heard Highway Tune, Safari Song, and/or When the Curtain Falls.” A Greta Van Fleet member flipped off a camera for an awesome reason in a new photo.