Guns N’ Roses debuted their new song “Hard School” when rehearsing for their Hollywood Palladium show on Saturday. A ‘Chinese Democracy’ era version recently leaked, a version without Slash and Duff McKagan. The reworked version of “Hard School” is the first confirmed new original Guns N’ Roses song featuring Axl Rose, Slash, Duff McKagan since 1991. While most fans praised the Palladium show, not everyone was thrilled. Axl Rose revealed a stunning new haircut at the concert.

Legenador posted on MyGNRForum.com, “I’m really, really, really HATING this band right now! I don’t even know were to begin: I told you so: no new songs on the set, condensed set, no rants, a new Slash solo (?). The leaks: the band has something to do with it, or else why rehearse Hardschool and don’t play it, and here’s what pisses the most, the alternate setlist.

Dead Horse, Locomotive, So Fine – So we old schoolers pray for something “different”.
Out Ta Get Me, My Michelle – So the real old schoolers pray and wait for Steven to come back to do one song. Any of the ChiDem songs in the list – So the new fans pray for something “different”. Benny & The Jets – Wow! A new cover!!! Hardschool – Let’s keep them hoping for something new. And that’s it. They don’t wanna do it and they will keep playing with us, with a big “ALMOST” every time.

See, Meegan (Slash’s girlfriend. Axl Rose’s ex-wife recently broke her Guns N’ Roses silence) even posted a IG story with Slash warming up playing Locomotive. So why rehearse the damn thing (Locomotive and Hardschool) if they are not gonna play it? Just to keep people hoping during the rest of a 3 year tour with the SAME SETLIST.

I just can’t with LALD, Slither, I Used to Love Her, Black Hole Sun anymore, they are not that great! They are just teasing and keeping us “interested” hoping something different will happen.

The first leaks were great-to-ok (Perhaps, State of Grace, Hardschool, Atlas even the new Silkworms), but now I understand why there’s no ChiDem 2, there’s not enough good material!

And then people here in this forum think that Eye On You, Quick Song, Zodiac are AWESOME. For real? Well, when we don’t have nothing even a whistle is great, right?

I’m done, that’s not the band that I love and support for 30 plus years.

Yes, maybe I think they owe me something because I bought the records, the tickets, the merch, I supported them, as all of us here did., but maybe I’m wrong.

I don’t have anymore expectations with this band, they are great, I still love them, but to me it is enough.”

Turn that frown upside down! GNR are back on the road and are working on a new album, with fans hoping for a 2020 release. Axl Rose inviting a famous women group onto his private jet was recently revealed. 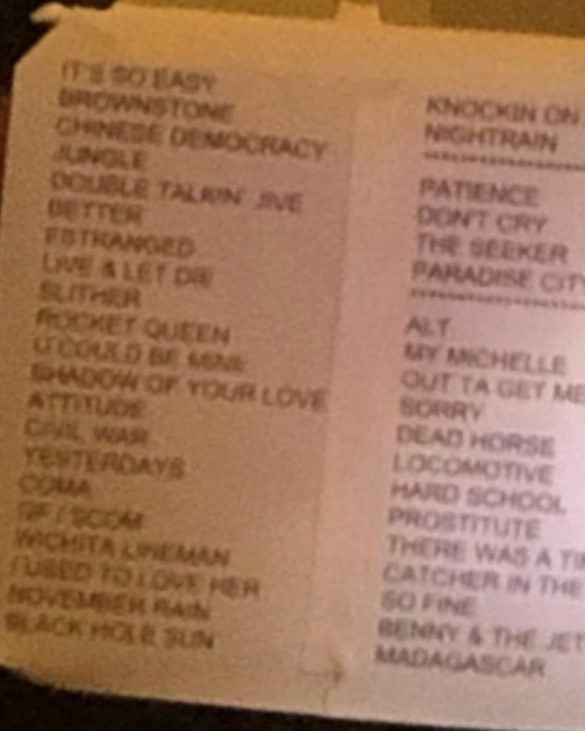