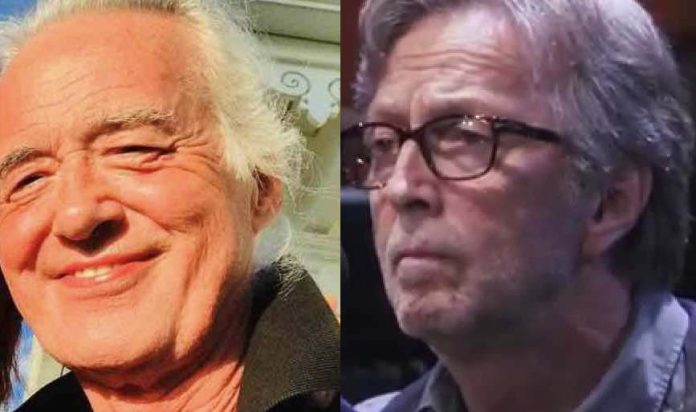 Page said, “On this day in 1965, John Mayall released the single Witch Doctor / Telephone Blues on Immediate Records, where I was a producer.⁣
⁣
It was recorded at Pye Studios with jazzer Hughie Flint on drums, John McVie on bass (middle), John Mayall (left) on keyboards and vocals and Eric Clapton (right) on guitar. It was recorded in June of 1965. When ‘Witch Doctor’ came to be overdubbed, Eric had this idea to put this feedback wail over the top. I was with him in the studio as he set this up, then I got back into the control room and told the engineer to record the overdub.⁣
⁣
About two-thirds of the way through, he pulled the faders down and said: ‘This guitarist is impossible to record.’ I guess his technical ethics were compromised by the signal that was putting the meters into the red. I suggested that he got on with his job and leave that decision to me!⁣ Jimmy Page recently revealed horrible Jimi Hendrix rejection.
⁣
Eric’s solo on ‘Telephone Blues’ was just superb. I would like to have seen Ainsley Dunbar on drums in the studio for ‘Witch Doctor’. I also produced ‘Sitting On Top of the World’, showing John Mayall’s blues to Top 20 ambitions, and ‘Double Crossing Time’, an ironic title as the next time I heard of them they were in the very capable hands of Mike Vernon – famed blues producer. It was a good move: Eric left The Yardbirds because they had Top 20 aspirations!”

Page also recently wrote on his social media, “On this day in 1985, ‘Scream For Help’, a Michael Winner film, was released. John Paul Jones had been drafted in to do the soundtrack and he asked me to play on it. We wrote ‘Crack Back’ and ‘Spaghetti Junction’ and both pieces appeared in the film and soundtrack album.” Green Day singer Billie Joe Armstrong recently made a painful Jimmy Page revelation.