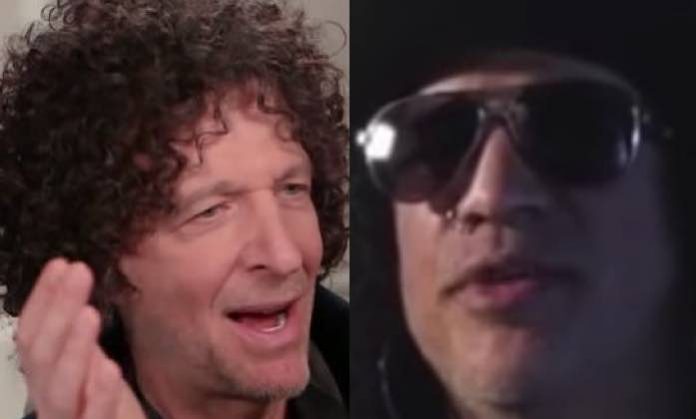 Howard Stern recently uploaded a video of Guns N’ Roses guitarist Slash and Aerosmith singer Steven Tyler performing “Dream On” with Train. Playing with Train may be seen as embarrassing to many rock purists, but “Drops of Jupiter” is a classic in our book! Michael Jackson’s daughter recently made an ’embarrassing’ Slash claim.

Stern also aired a show this past week where he discussed last year’s Super Bowl halftime show. MarksFriggin.com recapped: Howard said the over under on the National Anthem was 1:45 and she dragged the song out by repeating the last line. He said that one analyst said that the first time is the end of the song. Howard said it’s not over until she stops singing. He said that she may have had the over and she dragged it out at the last second. Howard had some tape of Gladys Knight singing the National Anthem. Robin said that had to be planned because you don’t end on the down note.

Howard said there was a bet about people taking a knee during the Anthem. He said no one did. He said that CBS was fiend for showing Janet Jackson’s nipple and no one got upset with Adam Levine showing nipple. Howard said it’s almost like middle east law. He said it’s very big controversy. Robin said he was doing a strip tease. Howard said someone said if they gave him 2 more minutes he would have been nude.

Howard said he doesn’t get the half time show at all. He said they do medleys and it’s a compressed performance. He said that he question that. He wondered if the record company is doing that or is that up to the artist. He wondered why it has to be compressed.

Howard said the first rapper to come out has to be nuts. He said that he was in front of the biggest audience he’s ever been in front of and he was bleeped for half the performance. Howard said he was thinking he made a statement but then he figured he was just cursing. Robin said the bleep was like a half hour long. Howard wondered why you would do that. Robin said the silence lasts forever and you don’t know if he’s coming back.

Howard said the rapper with the big fur coat was something he didn’t like. He said you don’t wear a dumb coat like that. Howard Stern recently made a heartbreaking Billy Joel announcement.