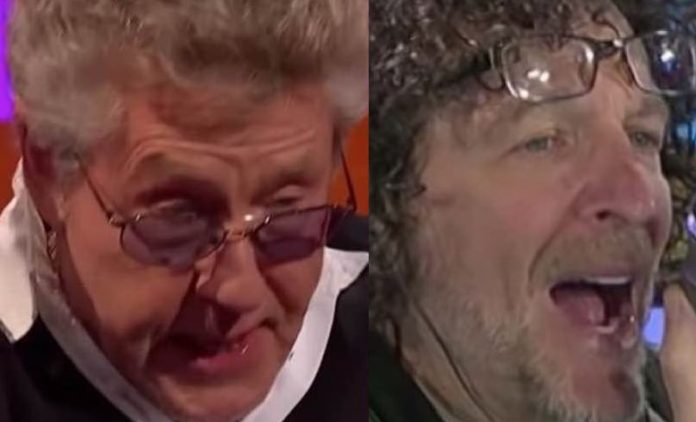 Howard Stern revealed a horrible The Who and Roger Daltrey paycheck on a recent episode, the day after an onstage meltdown.

MarksFriggin.com recapped: Howard said they forgot to hire an emcee so they had a lighting director making announcements. He said they were warning people about bad drugs. He had a montage of those announcements that he played. There were many announcements about the acid being passed around.

Howard said that was a guy known as Chip Monk. He said he was the lighting director. He said back then there were no cell phones so you weren’t able to find anyone. He said a lot of the announcements were for people looking for other people. Howard played a montage of those announcements too.

Howard played Joni Mitchell’s ”Woodstock” song and said that she didn’t go to Woodstock. He said she wrote the song and made it sound great and romantic but it was anything but that. He said Crosby Stills and Nash changed the song. Howard had some audio of Graham Nash talking about Joni Mitchell missing out on Woodstock. Howard played their cover of the song after that.

Howard said this weekend on Howard 101 they have a special version of Saturday Soundtracks about Woodstock. He said it’s hosted by Fred Norris. Fred said he didn’t know he was hosting it. He said he was just making announcements about it. Howard said The Who only got paid $6,000 to do the concert. He said Crosby Stills and Nash only got 5 grand. He said Mountain got 2 grand. He said Richie Havens got $6,000. He went through some other payments that bands got. Stern revealed disgusting The Who disrespect last month.

DolphinsIntheJacuzzi posted on the SteveHoffman.tv forums about The Who’s show in Houston earlier this week that ended early due to vocal issues, “I was there, and I’m sure Pete considered finishing the show. But he did stress that ‘This is Roger’s show.’ Now, I don’t know if that’s just basic solidarity. Or if he’s referring to the fact that Roger is the one who basically spearheaded the whole concept of this tour with his orchestral Tommy shows. But either way, I respect his decision.

Also, Roger seemed really upset about it, much moreso than Pete. And when Roger looked noticeably shaken after scaling back from a note, Pete offered, sympathetically, “It’s just a f—–g bum note. Nobody here is going to care.”

Obviously, it was more than that, as Pete soon found out. But it underscores the camraderie and support the two have for each other. Pete even went on to observe, somewhat confusedly, ‘I don’t know what’s wrong tonight. He’s been singing really well on this tour.’

So, they cancelled. It happens. No big deal. I’ll be there when they reschedule. And I’d rather see the show as they intended, instead of a truncated or altered version. YMMV.” Roger Daltrey called out an awful The Who performance last month.