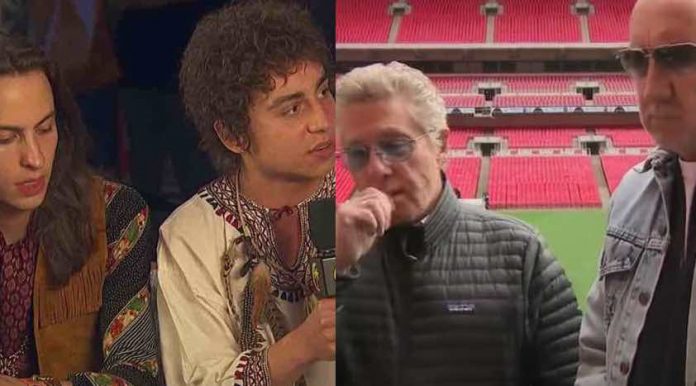 Greta Van Fleet guitarist Jake Kiszka said he is thrilled that The Who are still going and have not retired in a new interview, and said he’d definitely want to open for them or AC/DC. Also breaking today is that The Who had to end a show in Houston early after sad video of Roger Daltrey losing his voice came out. Greta Van Fleet ‘bullying’ was revealed by their mother earlier this week.

“The Who for me, would be huge,” he said. “I’d love to open up for them. I mean, really any of them because they’re all still out there making music.”

“We do like Metallica a lot and we kind of figured that they’d be the perfect group to go down there with,” he said. “I can’t even imagine what experiences lie ahead with that venture, we just know the audiences down there are absolutely wild so I think that will be a true adventure.”

Greta Van Fleet’s singer Josh Kiszka making a threat to quit was revealed a few days ago. Greta Van Fleet kicked off their fall North American tour on Monday at Red Rocks in Morrison, Colorado, and fans weighed in on the show on Reddit. AManFromTheMoon said, “Who attended from here, what were yalls thoughts? I personally felt the time on tour playing around and jamming brought these cats to the next level. ROCK ON GRETA! THANKS FOR THE MEMORIES!”

Gtimewhump posted, “Off the top of my head they opened with Cold Wind, then safari song, black smoke rising, flower power, age of man, then they did a John Denver cover (Josh called him his personal idol), and then they transitioned to you’re the one. The next song idk if it was a new song or what but it had an extended Jake solo (Kansas city setlist is giving me black flag exposition?) Finally watching over and when the curtain falls. For the encore they played lover leaver, highway tune and then went back to a reprise of lover leaver.”

A Greta Van Fleet member going crazy at Disneyland was revealed over the weekend. Melsa6128 wrote, “Was such a SICK show. They pretty much played the same setlist as listed on setlist.com spoiler alert. Honestly a little bummed they didn’t play Always There, but was so grateful nonetheless.”

onionpants chimed in, “It was amazing! They are ridiculously talented and brought their a game for sure! Their wardrobe picks were awesome too! If you’re going tonight, you’re in for a treat.”

You can read the full interview at OC Register.