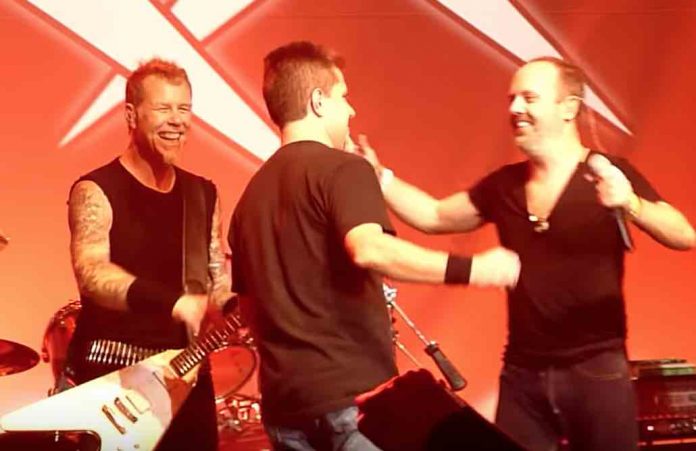 We recently reported how James Hetfield and Metallica’s one-time bassist Ron McGovney took to social media via Twitter to discuss the fact that he had an extended version of one of Metallica’s most known demo tapes entitled ‘No Life Til’ Leather’ and how he hoped for the band to put out the extended version. McGovney and Dave Mustaine were in the early Metallica lineup, and it’s definitely a ripoff for their time in the band to not deserve the utmost respect.

Now the one-time Metallica bassist answered another superfan of the thrash-rock legends who had another question revolving his rockin’ past. On Twitter recently, McGovney was asked by said Metallica superfan and Twitter user MetalMikef if McGovney played on the ‘Hit The Lights’ version that came out on the compilation album entitled ‘Metal Massacre.’

To which the former Metallica member gave a shocking response: “James plays my bass on the very first pressing. The second pressing is from No Life, and I played on that.”

Gavin Rossdale recently leaked this heartbreaking Metallica singer video. Fans recently took to social media to reflect on the aforementioned ‘Metal Massacre’ album that was released back in 1982. One fan replied: ” This is one of the best in the Metal Massacre series. The songs by Voivod, Omen, Metal Church, Overkill, and Fates Warning were only available on this compilation, which is worth the price of admission alone. The other tracks are fair but are mainly worth it for these. If you’re a fan of old school power metal, I suggest you get this one or better yet get the Metal Massacre Box set titled”Grim Harvest” which includes all twelve volumes. Metal Lives On!

This Metallica singer took a brutal shot at Jason Newsted in this newly uncovered photo. While another fan wrote: “What more can be said about this, the best piece In The Metal Massacre Collection. Some say that only a couple are good on here or they thought it might be speedier. Hell, it’s mid 80’s man. Anyways, those that want to hear fresh power metal of the day need look no further. I believe this was the one to kill them all. My two personal favorites of any Massacre discs’ are Omen and Metal Church. If you’re just getting into Metal Blade artists this should be first on the list. Give it a few spins and see what I mean. Your necks’ are gonna start aching. True Heavy Metal Will Never Die! Play At Extreme Volume Levels!