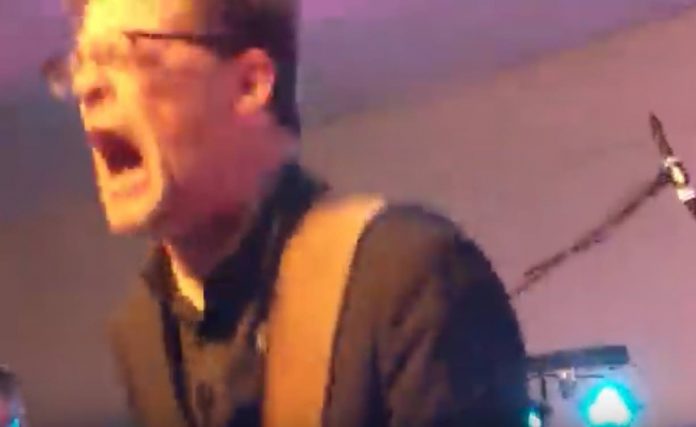 Dynamic Metallica guitarist Kirk Hammett took to social media via Instagram to post this drawing of the group in which James Hetfield is literally taking a brutal shot at former bassist, Jason Newsted. You can view it below. In other Metallica news fans of the band recently took to social media to discuss the legacy and impact of one of the band’s most beloved albums, ‘Death Magnetic.’ This Metallica icon recently called out blatant Dave Mustaine ripoff.

One fan chimed in and said: “Definitely one of my favorite albums. The songs are relentless, fast, and I love that they are all 5 minutes plus each. The longer the better in this case! The songs are all very fast-paced with the exception of “Unforgiven lll” , that slows down at the beginning and end, as well as “The day that never comes” which is slow to start but one of the fastest songs out of all. Some of the solos get a little out of hand but you learn to love them. I was going to say that “Judas Kiss” is my personal favorite but then I realized I love them all. The only one I tend to skip is “suicide and redemption” since its an instrumental-only and it’s basically ten minutes long. I don’t how people didn’t like this one as much as I thought met fans would. I prefer this ten times more than Load, Reload, and (especially) St. Anger. In my opinion, this was Metallica back to form after three albums of experimentation. Just incredible! You cant head-bang fast enough! Beyond Magnetic here I come!” Jason Newsted recently reunites with Metallica in an emotional photo.

While another Metallica fan put: “Let me just say right off the bat that Death Magnetic is an awesome album. It definitely belongs in the album collections of Metallica fans or just Metalheads in general. It’s a return to their thrash roots that will satisfy the people that prefer the older Metallica (The Cliff Burton Trilogy) and the people that became fans in the 90s (The Black Album). Metallica could have just been lazy and done a rehash of their early stuff and called it a day, but thankfully they didn’t do that. This is an older/wiser Metallica bringing years of experience and growth to the style that made them famous. It is most definitely worth checking out.” This Metallica ex-bassist confirms rumor: ‘here we go again’.