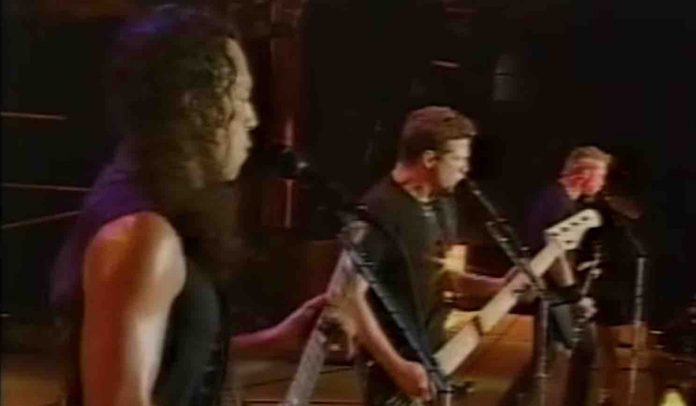 A Metallica icon has suffered a loss. Music photographer Ross Halfin took to Instagram to post this photograph of Jason Newsted and the group being inducted at the Rock and Roll Hall of Fame, subsequently commenting on the death of Cliff Burton’s father, Ray Burton. The acclaimed photographer wrote: “Ray Burton RIP a warm upbeat gentleman – Ray as they say in cricket had a good innings. I hope, if I get up there I’m as friendly and as humble. I last saw him at the Twickenham Metallica show in the snake pit .”

Fellow Metallica members have been paying their last respects for Mr. Burton as well, Lars Ulrich released the following statement via Instagram: “Ray…Thank you for lighting up every room you walked into, for inspiring all of us with your positive energy, your perseverance, your effortlessness and for always making everyone feel comfortable in your presence… and of course, thank you for giving the world the gift of Cliff and his unique talents. I’m honored and humbled to have played and stood beside him. Rest In Peace.”

Jason Newsted’s ‘devastating loss’ stunned Metallica fans. In other news regarding Metallica and the death of Ray Burton, fans recently took to the Metallica subreddit to pay their final respects. syracTheEnforcer said: “Good god. I didn’t realize he was still alive. He always seemed like a cool guy from the interviews. I always remember his interview on I think it was behind the music where he talked about Cliff having neck pain from headbanging. RIP. He really hung in there. 94? What a beast!”

Whereas bruzdnconfuzd said: “I Just found out about this a few minutes ago from another post, and it SUCKS. To see the energy he brought toward celebrating the band, supporting the band, you gotta believe that Cliff’s energy/spirit was still alive in Ray. He was the 5th member long before any of us could carry that fanboy nickname. He was the real deal. Cheers to you, Ray. Give Cliff a hug from us all.” Jason Newsted rejecting a Metallica money demand was just revealed.