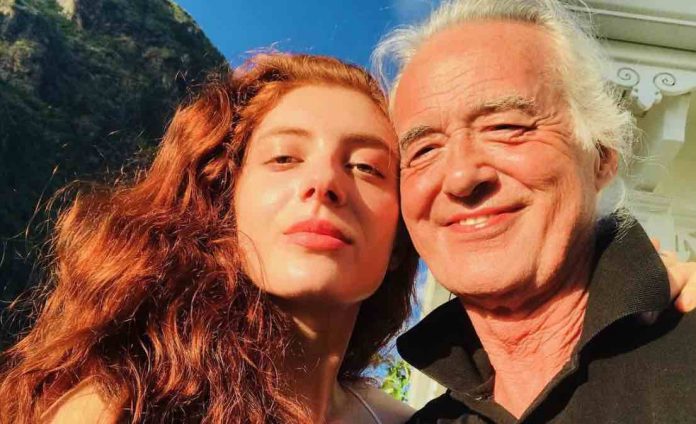 Led Zeppelin guitarist Jimmy Page has praised his girlfriend Scarlett Sabet’s poem “Rocking Underground” where she speaks about ‘pain’ and getting on her knees in a train. A Led Zeppelin icon revealed a 2019 comeback photo a couple of days ago.

Page said, “On this day in 2014, @scarlettzsabet released Rocking Underground – her debut collection of poems.

The title poem from this book is a spectacular demonstration of Scarlett’s vibrant prose and her delivery of this poem is so powerfully captured on the opening track of Catalyst, available now from my website and on all major streaming platforms.”

Jimmy Page posted a photo recently with an alleged The Rolling Stones pedophile. In a video for the poem, Sabet says, “City rat/dressed in black/worn down underground/trying to block out the pain/the thoughts that make you go insane/that crawl inside your brain when you weren’t looking/distracted by hunger and fame and the simplest of your day to day pain/until you wake up look in the mirror realize you’re not the same/you keep separating your brain/but you try to assimilate/continue to be the same in your own unique way/jump on the great city train/give up your seat/get on your knees and exclaim/oh hell king of all things the same.”

Jimmy Page also called out Robert Plant disrespect at a concert. Robert Plant recently told Ultimate Classic Rock Nights radio about Stairway to Heaven, “Of course, it was a good song,” he said. “The construction of the song, the actual musical construction is very, very good. It’s one of those moments that really can stand without a vocal – and, in fact, it will stand again without a vocal, I’m sure, because it’s a fine, fine piece of music.”

He noted that “lyrically, now, I can’t relate to it, because it was so long ago. … I would have no intention ever to write along those abstract lines anymore. I look at it and I tip my hat to it, and I think there are parts of it that are incredible. The way that Jimmy [Page] took the music through, and the way that the drums reached almost climaxed and then continued. … It’s a very beautiful piece. But lyrically, now, and even vocally, I go, ‘I’m not sure about that.’”

You can listen to the interview on Ultimate Classic Rock Nights.