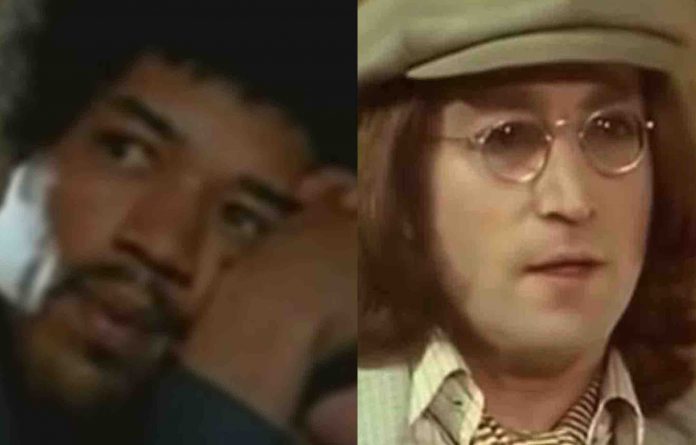 John Lennon‘s son, Sean Ono Lennon recently took to social media via Instagram to share this far out and radical photo of one of music’s all-time greats in Jimi Hendrix. Hendrix can be casually seen playing the guitar next to this classic and vintage automobile, holding guitar of nearly the same color. John Lennon called The Beatles icon ‘freak’ before shooting.

Lennon had this to say about the photo: “Jimi is the only person who died before I was born whose death has made me break down in tears.”

In other news revolving Sean’s father, John Lennon, people recently took to social media to discuss and debate the legacy and impact regarding one of Lennon’s most powerful albums – Imagine.

John Lennon ‘getting hard’ comment finally revealed. One fan stated: “This is a great album. It is a pity I didn’t get it any sooner than I did. There are great songs, such as course: Imagine, Jealous Guy, Crippled Inside, but the one I love most is Gimme Some Truth, what a wonderful song!. This isn’t just an ordinary album,it has the potential of a great composer and musician. With this album, John Lennon really demonstrated that he was one of the great musicians of the 20th century.”

John Lennon goes to ‘sleep’ before dying in this eerie photo. While another fan noted: “Imagine is one of my favorite albums not only by John Lennon but by any artist. In my opinion, Imagine is John Lennon’s best album and extremely progressive. Whether you are a fan of the Beatles or just love music, Imagine will be a wonderful addition to everyone’s collection of music albums. Recently, the world mourned the 30th anniversary of the passing assassination of this great artist. Everyone will enjoy the sound of this great collection of songs.”