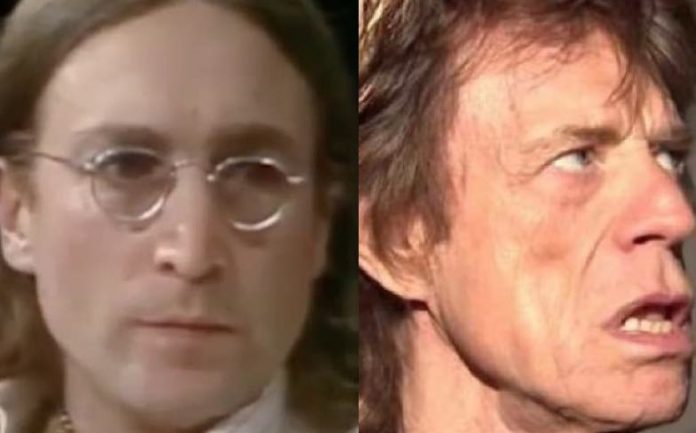 The Rolling Stones’ Rock and Roll Circus is one of rock’s most memorable concert films, uniting some of the biggest names in rock history, with Mick Jagger fronting The Rolling Stones and being joined by The Who, Eric Clapton, and The Beatles icon John Lennon. Lennon agreed to perform at the show, but then rejected the offer when he saw boxing kangaroos. He sent Yoko Ono to demand the kangaroos be removed.

Lennon reconsidered after his request was met, and the kangaroos were no longer part of the show. The Rock and Roll Circus was the first time Lennon spread his wings without his Beatles bandmates, and was a hint of what was to come for him during his solo career in the 70’s after The Beatles break up. This Rock and Roll Circus performance was an odd and unique show, with a carnival vibe and crazy outfits. Jagger’s then girlfriend Marianne Faithfull is also featured as a performer in the film. Sadly John Lennon is no longer with us, but The Rolling Stones are on tour, and in an interview promoting a show, Keith Richards revealed the surprising Stones classic that he thinks is terrible.

Michael Lindsey-Hogg said in a new retrospective, “About three days before we were gonna start – we had one day or rehearsal and one day of shooting – Steve Winwood hadn’t been heard of for a while so we called him and he said ‘I just can’t get it together’. Fair enough but this leaves us with a big hole in the show because that’s a key spot, the supergroup spot – there were no supergroups at the time. The Stones and The Beatles were quite friendly so we thought maybe McCartney would like to do it, but we thought he probably wouldn’t want to perform without the other Beatles, and then of course if The Beatles are on the show that capsized The Rolling Stones as being the stars.”

“So we thought John Lennon might have the temperament to just jump in. So Mick called John and he said ‘yeah, I’ve been playing with Eric Clapton just for fun, he could play, who could play bass?’ And Mick said ‘maybe Keith could play bass’. We all liked Mitch Mitchell from the Hendrix Experience so in that one phone call we had John Lennon, Eric Clapton, Keith Richard and Mitch Mitchell to fill that supergroup spot. So that’s not too shabby. That’s the way it was at the time. It was partly to do with the friendship and the mutual admiration that the key players had for each other that made the show possible in the first place.”

You can read the full piece at NME.