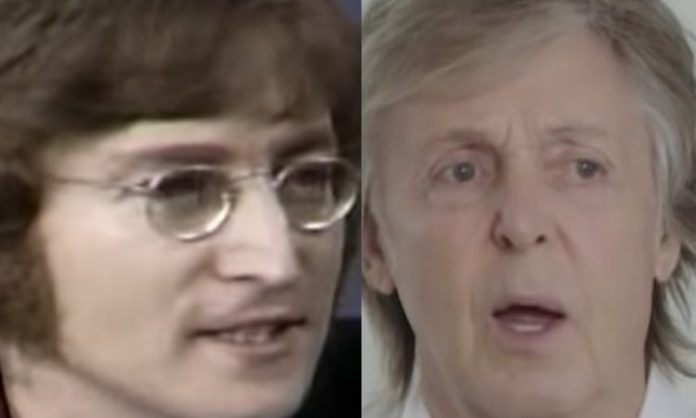 The official Instagram account for late The Beatles icon John Lennon tweeted out the following quote. John Lennon’s widow revealed this beach swimsuit photo. The quote is actually a section of lyrics from one of The Beatles hits. This one, being Sun King, which is off of the group’s 1969 album, Abbey Road. John Lennon lost massive money before his death. You can view the post below:

johnlennonofficial
Verified
SUN KING⠀
Here come the Sun King⠀
Here come the Sun King⠀
Everybody’s laughing⠀
Everybody’s happy⠀
Here come the Sun King⠀
Quando paramucho mi amore de felice carathon⠀
Mundo paparazzi mi amore chicka ferdi parasol⠀
Questo abrigado tantamucho que canite carousel⠀
⠀
“That’s where we’d pretend to be Fleetwood Mac for a few minutes (laughs). So we did the introductions – we call it the ‘Sun’ riff – that little instrumental bit that’s like Fleetwood Mac but before we start singing. Then we did it again on the end, so when we came to sing it, to make them different, you know, so as it wasn’t just the same riff. ⠀
⠀
We just started joking, you know, (sings) “Quando para mucho..” so we just made it up. Paul knew a few Spanish words from school, so we just strung any Spanish words that sounded vaguely like something. Oh it’s cod, you know! And of course, we got ‘chicka ferdi’ in – that’s a Liverpool expression. It doesn’t mean anything but ‘nya nya na na na’ – chicka ferdi! ⠀
⠀
The one we missed – we should have had ‘para noia’ you know, but we forgot all about it. We used to call ourselves ‘Los Paranoias’ (laughs).”⠀
⠀
Photograph: @LindaMcCartney © @Paul McCartney⠀
#AbbeyRoad

In other news regarding The Fab Four, fans on the official Facebook page were discussing their favorite John Lennon lyrics.

Jim said: “Our society is run by insane people for insane objectives.I think we’re being run by maniacs for maniacal ends and I think I’m liable to be put away as insane for expressing that.that’s what’s insane about it.”

Brady replied: “Misunderstanding all you see…” Always made me think does he mean that you don’t understand what you are seeing, or is there just so much confusion and misunderstanding going on all around you that it is all that you see.”

Tom put: “When she was young, she was told that pain would lead to pleasure, did she understand them when they said that a man must break his back to earn his day of leisure, will she still believe them when he’s dead?’ Brilliant lyrics from Girl.” John Lennon called this member of The Beatles a ‘Loser’.