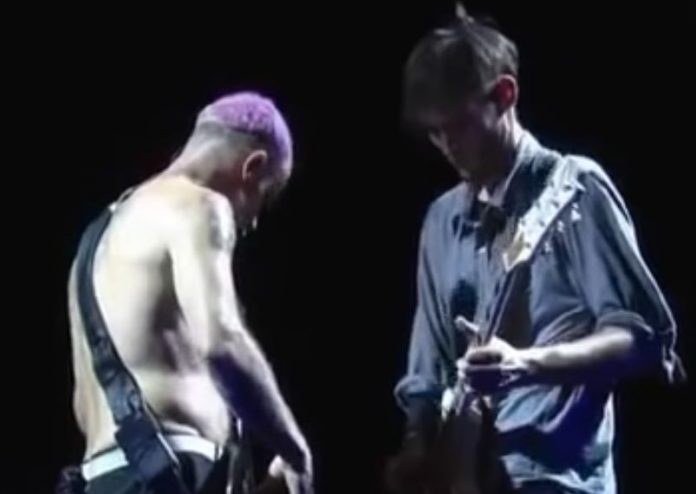 Former Red Hot Chili Peppers guitarist Josh Klinghoffer and Flea both attended the Los Angeles Lakers vs. Portland Trailblazers game on Friday, the first time in 2020 they have been in the same public location. Sadly though, they were not sitting next to each other like they have in the past, with Flea having better seats than Josh. Klinghoffer recently discussed his money concerns after being fired by RHCP.

Klinghoffer recently told Rolling Stone magazine that he’d be open to playing again with RHCP as a guest or permanent member. He said, “Yes, of course. I love them as people and I always want to play with my friends and that’s all I’ve ever wanted. I just wanted to be in a band since I was 12. And I got it a little bit for 10 years.”

Kenticus69 posted, “Flea is also at the game – he just gave a very impassioned speech about Kobe on the telecast. Here’s hoping flea and josh caught each other at the game today and gave each other a hug and some love for the 10 years plus they rocked together. Life is too short.”

Samc497 responded, “Listening to Marc Marons podcast with Josh, which took place just after he was fired, he mentions him and flea have been our for lunch a few times since, so I’m pretty sure they’re on good terms 😃. Worth a listen to as well.”

AmdusiasHades said about John Frusciante replacing Klinghoffer, “It’s bittersweet, I’ve grown up with the Peppers since I can remember honestly but the first big release I can actually remember is I’m With You, but before that released I knew all their John stuff already. I love both the Josh-esque Chili Peppers and I love the John-esque Chili Peppers. John is an amazing guitarist and I love his sound but I actually loved the Josh albums more than almost anyone I’ve seen on this reddit. So as aforementioned, it’s very bittersweet cause I really love Josh and the music they’ve put out with him, but I’m really excited to see what John will bring to the table after not being part of the band for well over a decade.

Controversial Topic: I don’t understand why people just seem to not be able to enjoy both the albums with Josh on it and the albums with John on it. Like, when you don’t REALLY like the albums with Josh, you don’t have to fucking whine about it every time and badmouth Josh all over the internet, I really hate to see those kinda shitposts.” A Red Hot Chili Peppers icon just revealed why John Frusciante quit guitar.