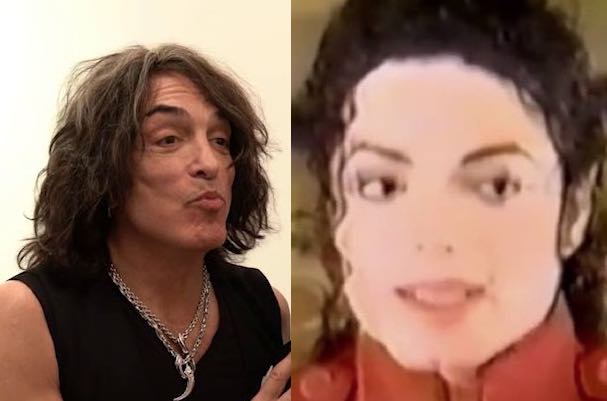 Co-writer of KISS‘s legendary 1979 track, “I Was Made For Lovin’ You”, LGBTQ gay icon and legendary Aerosmith songwriter Desmond Child was recently interviewed by acclaimed professional wrestler Chris Jericho for his podcast, ‘Talk Is Jericho’. Here, Child discusses how he tried to write a track for the late ‘King of Pop’, Michael Jackson. Alice Cooper reveals if Paul Stanley ‘scammed’ KISS fans.

“I tried to. After I had this ginormous run with Ricky Martin and ‘Livin’ La Vida Loca,’ ‘She Bangs,’ ‘Shake Your Bon-Bon,’ ‘The Cup of Life,’ all of that, I got a message that Mr. Jackson wanted to meet me. So, I flew to New York, I went into this townhouse – I think he was on the run – and I go into this long kind of dining room that could seat 50 people, but it was all very dark, and he comes in his silk-striped pajamas, a baseball cap, and big glasses, and we talked for, like, an hour.”

Paul Stanley looks like ‘clown’ in brutal KISS photo. Child continues: “And so, basically, he wanted to know everything about Ricky Martin. He was kind of using me to say, ‘Well, where does Ricky go on vacation? What kind of music does he listen to? Who were his influences? And, you know, he loved fame, and he would try to dissect all the famous people, from Elizabeth Taylor to Brooke Shields, Princess Diana, who he was obsessed with. And he would try to kind of understand how it is that the public’s imagination is ignited by these special people, and he became the master of it. I went back to Miami and we said we’re gonna write the following week, so I flew back again; very expensive, you know, flights, hotels, everything, for myself. And so I get to the studio at the appointed time, at 10:00 AM, Sony Studios in New York and, you know, there was, like, a big table, a layout of food, catered lunch meats, and cheeses, all these kind of stuff – it could’ve fed an army.”

Child also says: “And then I walked in and then all these stuffed animals, and on the counter was this giant gorilla, fake gorilla, and, you know, the engineers were waiting. And so, now was 12:00 and he wasn’t there, and I started getting really hot under the collar, so I decided to call the house. And I call and somebody picks up the phone and goes, ‘Oh, Mr. Child, Mr. Jackson’s very ill. He’s very, very ill. He can’t come to the studio. We tried reaching you all weekend,’ which was not true. It was him talking to me, like, his voice is so identifiable. [Laughs] There was no one else there, you know? ‘Mr. Jackson is very, very ill,’ you know, with the little vibrato, so I just like, ‘Okay, then you can have his people call my people,’ and that was the end of it.” Credit to Ultimate-Guitar.com for the transcription.