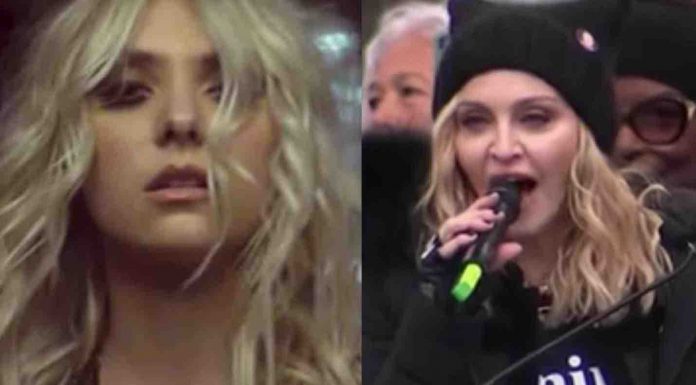 Strike a pose! The self-processed ‘Queen of Pop’, Madonna was on hand to snap this eye-catching shot of The Pretty Reckless frontwoman, Taylor Momsen. Momsen looks stunning and sensational in this floral skirt and white jacket but it is truly the fact that two music icons, Madonna and Momsen are in this photo together is which makes this particularly memorable and awesome. Dave Grohl revealed what Madonna did to Kurt Cobain back in November.

In other news regarding Madonna, the pop queen issued the following statement regarding one of her upcoming tour dates, canceling it due to health reasons. Madonna wrote: “I am deeply sorry that I have to cancel my concert scheduled for Monday, January 27th in London. Under doctor’s guidance, I have been told to rest for a few days. As you all know, I have injuries that have plagued me since the beginning of the tour but I must always listen to my body and put my health first.  The last thing I want to do is disappoint my fans or compromise the integrity of my show.  So I will keep going until I cannot.  As always- anyone who purchased a ticket will be refunded for tickets purchased that evening.  The show on Wednesday, January 29th will go as scheduled.  Again I am deeply sorry to disappoint anyone and please know that it hurts me more than you can imagine having to cancel any shows. Thank you again for your understanding.” Paul McCartney’s daughter revealed this  Madonna alcohol photo last year.

Fans quickly responded to the news. On Facebook, John stated: ” I really think you should just cancel the whole tour. I appreciate you have a knee injury but think it would be fairer on your fans if you just cancel all dates now and get your knee fixed and then tour the UK again when you’re fit again. also next tour please do big arenas again and do SSE Hydro in Glasgow. you were amazing there in 2015.”