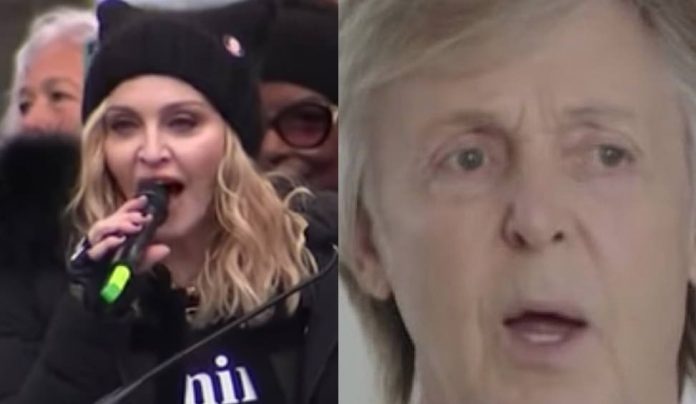 The Beatles icon Paul McCartney‘s daughter – Mary McCartney recently disclosed this photo of herself and pop music legend Madonna boozing it up over drinks at the Hackney Empire theatre in London, England. McCartney had this to say regarding the photo: “Backstage at the Hall Of Fame, London, with Madonna and Tracey Emin.” You can view the photo of the two sensational women, via Mary McCartney’s official Instagram below. Paul McCartney recently reacted to awful “Yesterday” performance.

In other news regarding Mary’s father Paul McCartney and the Beatles one user via the Paul McCartney.com fan forum discussed the possibility of a remaster of McCartney’s 1997 studio album – ‘Flaming Pie’.

The user wrote: “‘Flaming Pie’ would certainly be a surprise to me.  I say that because the ‘Flaming Pie’ era doesn’t have that much extra material built around it.  Because of Linda [McCartney]’s sickness, Paul wasn’t touring at the time and from my knowledge, the album didn’t have many extra songs left off the album. Maybe as a smaller Archive release (two-CD package), it could work well as a Holiday/Christmas release.  I did buy the ‘Flaming Pie’ DVD that was very good and that could be part of the Archive package as well.  On the DVD, Paul does play several of the ‘Flaming Pie’ tracks and they were just fab.”

Rush singer Geddy Lee was disrespected by Paul McCartney the other day.  The user continued: “The reason that ‘Flaming Pie’ would be a surprise as the next Macca Archive Collection is that the combination of ‘London Town’ and ‘Back to the Egg’ as the next release would have so much more material that in my opinion, Macca fans would love to have.  Not only do you have the singles/B-sides that were left off both albums, but you have unreleased songs never included on either album like ‘Waterspout’, ‘Cage’, etc.)  Couple that with the live material during the period (e. g. ‘Wings Over Europe’)  and you would have a ton of material to draw from.”

The user concluded: “I certainly wouldn’t mind ‘Flaming Pie’ for the end of this year but I would prefer ‘London Town’ and ‘Back to the Egg’ for the reasons above.  I do love the ‘Flaming Pie’ album in general.  I do think the good to great songs on FP are some of his best Solo songs period (‘Beautiful Night’, ‘Little Willow’, ‘Somedays’, ‘Calico Skies’, ‘Young Boy’, ‘Great Day’, ‘Souvenir’) but I wasn’t a fan of some of the lesser songs.  I always thought ‘Really Love You’ marred ‘Flaming Pie’.  It was an over five-minute jam song with Ringo that in my opinion that was way too long and should have been left off of ‘Flaming Pie’.  Replace ‘Really love You’ with another really good song and ‘Flaming Pie’ would be right up there with ‘Chaos’ and ‘Tug of War’ as Paul’s best solo albums in my opinion. Paul McCartney revealed why John Lennon was ‘jealous’.