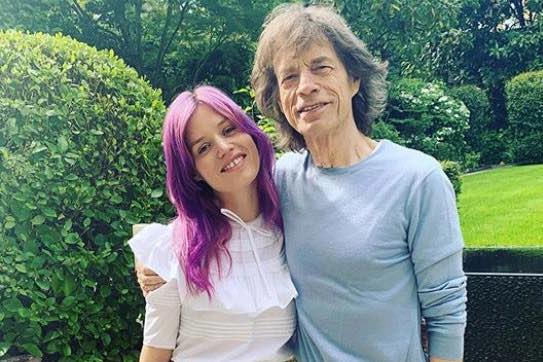 The Rolling Stones frontman Mick Jagger‘s daughter Georgia May Jagger has been photographed kissing acclaimed restaurant owner Louis Lévy on her social media. Jagger moved to New York in July to be with Louis after they had maintained a long distance relationship. Mick Jagger and Keith Richards’ daughters were recently spotted kissing.

Georgia wrote, “Happy 30th LLL.” jasmineguinness commented, “@violetogden She’s a long way away if she is!” Georgia responded, “@jasmineguinness I knew I would get caught out by my Irish family!!! Miss you guys coming for my chicken soon.” jasmineguinness
shot back, “@georgiamayjagger 😂 Busted dude! 😂Love you ❤️❤️”

The Rolling Stones guitarist Ronnie Wood is focusing on his solo career this fall, and fans have discussed his upcoming plans on IORR.org.

Mick Jagger recently was forced to pay thousands of dollars for a stupid reason. triceratops posted, “It’s kinda cute that Ronnie is covering a Chuck Berry that Mick and Keith et al covered ages ago before Ronnie was a Stone. Likely 11 years before Ronnie got Sanctified as second guitar. These days he is primary guitar and plays lots of Keith’s old parts. Jagger appreciates this immensely but will not say so publicly. All in all the Stones keep Rolling due to their Mick-Ronnie combo plus all their immense and loyal support musicians and support staff that want and need paychecks.”

Testify responded, “Ronnie started playing in the early 60s, like Mick and Keith even though he’s a little younger, and he sounded just like Mick and Keith that music. There comes a moment in life that you look back and see everything you’ve done and realize who you’ve been influenced by and it is normal to offer them a tribute. I don’t see anything wrong with it, but if you think it’s just for money, don’t buy the album and don’t download it from the internet, nobody forces you.”

Big Al chimed in, “Yep. Ronnie made his professional recording debut only a year-or-so after the Stones. Not sure where this ‘11 years’ is coming from.” Mick Jagger was recently devastated by sad news.