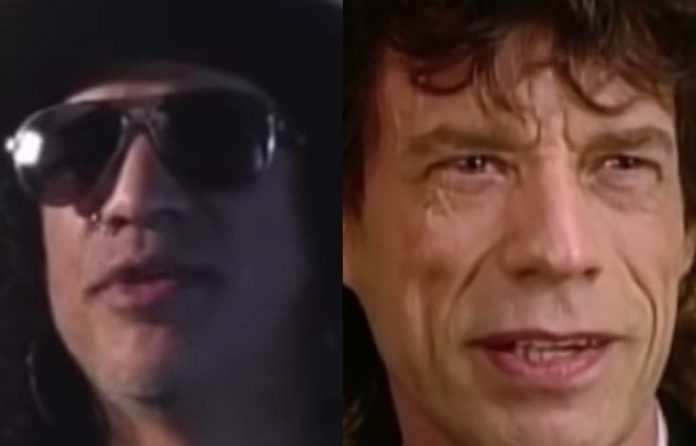 The Rolling Stones members Mick Jagger and Keith Richards, along with Guns N’ Roses guitarist Slash, were lampooned by David Spade in a bit bit he did about a ‘shitshow’ Stones concert he attended at The Rose Bowl in Pasadena, California. Alternative Nation reporter Mike Mazzarone transcribed Spade’s comments. Keith Richards and Mick Jagger’s daughter were recently spotted kissing.

“So I go to this unorganized shitshow, known as The Rolling Stones concert at The Rose Bowl. The Rose Bowl is where they have football games and there’s a flea market on the weekends. Once I got there and got a lay of the land, I realized, this is even a crummy place to have a flea market. But no, we are gonna have a full-blown concerto. But I go, great guy.

I get good tickets because I’m famous – Slash and I scalped them so the famous part didn’t really kick in. When I get there, I have to go up and down tunnels, and [motioning] one was like that, and so, in my head, I do the calculations that ultimately, I’m gonna have to leave and go back up the tunnel. Then we’re all gonna find out who’s older than Mick Jagger.”

A sad Mick Jagger and Michael Jackson claim was made by an actress a few days ago. The Rolling Stones wrapped up their ‘No Filter’ North American tour last month, and fans are hoping to see a new album released in 2020.

Monsoon Ragoon posted on the IORR.org forums, “Even a ‘sub-standard’ new Stones album is better than nothing. A Bigger Bang was far better than many on here believe, but maybe too long, with too many fillers. If the “new album” will ever be released we should not expect another Exile or even Tattoo You. What were the real great songs 1989 onwards: I count Love Is Strong, Highwire, It Won’t Take Long, Laugh I Nearly Died, Continental Drift, Blue And Lonesome, maybe 4-5 more.

I don’t expect wonders. None of them – except LIS – has been widely performed in concert, by the way. But that is another discussion. If they play ‘new’ songs they play trash. Good trash maybe. Out Of Control for instance is actually not a classic, but it rocks every stadium. Same with You Got Me Rocking.” Mick Jagger was recently spotted at a bar with an A-list model.