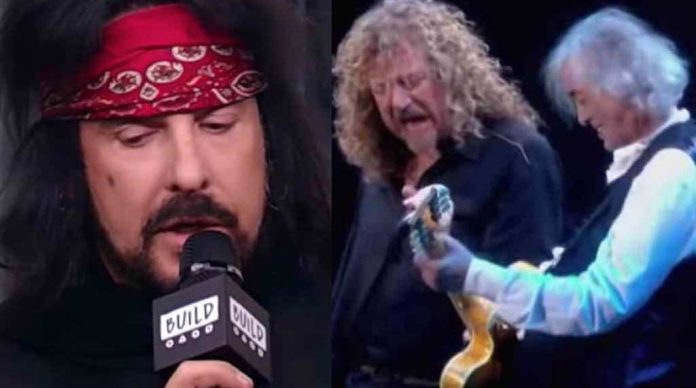 Motley Crue bassist Nikki Sixx has posted a bizarre 80’s choir video, and he claimed that if you played it backwards, it sounds like the Led Zeppelin classic “Stairway to Heaven.” We’re not so sure Jimmy Page and Robert Plant would agree! Howard Stern recently revealed an awful Robert Plant performance.

weirdvintageeveryday wrote on their video post that Sixx linked to on Twitter, “If not for the Internet, we’d never know music videos like this existed. (Please turn on the sound when you are at work!)”

A fan named MotleyToes tweeted Sixx, “Nikki it’s 1 am, how am I supposed to sleep now?” Sixx responded, “Play it reverse. It’s stairway to heaven.”

A proposal for the Greta Van Fleet singer to front a Led Zeppelin reunion was revealed earlier this week. Sixx also suggested on Twitter that Pope Francis should run for President of the United States after learning that he used to be a nightclub bouncer.

“He should run for 46. We had a trust fund baby reality star why not a bouncer Pope or a real fucking housewife for President.”

A fan later asked Sixx, “Question I was playing bass long time ago and I was thinking to play it again in a few time I love Gibson/Epiphone gears I used to play on a precision bass and I want to know what you think about the Gibson/Epiphone thunderbird ? Thanks a lot.”

Sixx responded, “Tons of cool basses. Find what feels good in your hands and sounds good to your 👂🏼. My new @SchecterGuitars. Jazz is coming soon. Best bass so far.” A Motley Crue icon recently wrote goodbye after tragic news.