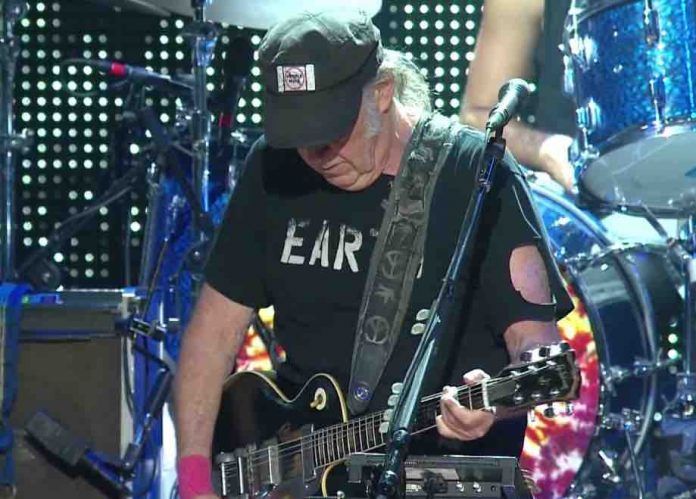 A fan asked on Neil Young Archives, “Hey Neil, Hope you’re having a nice break after the European tour. I’m a guitar player (a terrible guitar player), but I’m currently trying to teach myself piano with your song ‘Speakin’ Out.’ I’m finding it a bit of a struggle right now, but I’ll keep trying. A couple of questions occurred to me: when did you start playing piano? How did you learn? Any tips for a guitarist switching to piano? Thanks, Mark.”

Young responded, “Mark,  I can’t play ‘speakin out’ either. It’s fun trying though! Make sure you like your piano a lot and take care of it. . . .. and try every piano on the world if you can. Thanks,  Neil.”

Young also recently discussed the loudness wars, “We don’t get sucked into the loudness wars that that the rest of the record making engineers so frequently engage in. We preserve dynamics at all costs. The way the music was originally made, both loud and soft.

We don’t ever employ compression in the mastering stage. The time to use compression or limiting is in the recording stage, or possibly during the stereo or mono mixing as the case may be. But I don’t second guess the original engineers or producers in the sound they captured back then when these particular records were made. Plain and simple, that is what a VOLUME knob is for.

In Mastering for vinyl there are limitations in terms of groove depth and amplitude of the applied signal at the cutting head. The CD format has its own limitations that do allow for a slightly higher signal level to be encoded than on vinyl per se. But we always want to preserve headroom so there are not nasty “overs” which can and will distort the music depending on the listeners’ equipment.

Again, move your hand over to the volume knob and turn it up. Play it loudly and enjoy. And then turn it up some more. If people complain, turn it up until you can’t hear them.” Neil Young recently dropped a Led Zeppelin reunion tour bombshell.