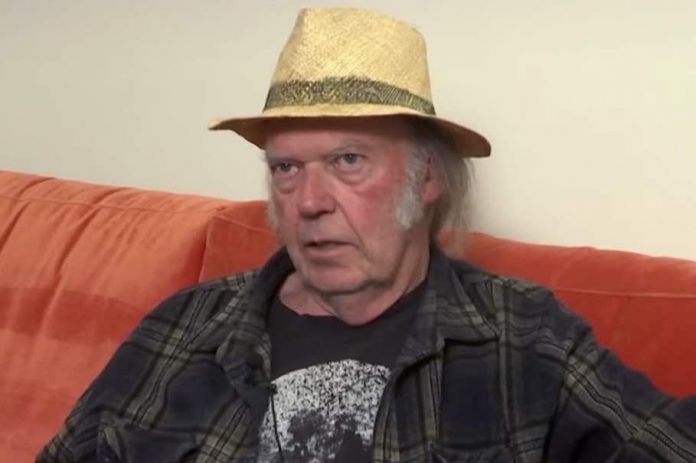 Neil Young had his car photographed when going out to dinner at a restaurant in Los Angeles with actress Daryl Hannah. A fan also said a server once told him that Young gives ‘good tips.’ Neil Young just discussed a The Rolling Stones member ‘leaving’ before he could tour with them.

Steven Hyden tweeted, “Happy birthday Neil Young. Four years ago I was in LA and I saw him eating dinner with Daryl Hannah. This was his car parked outside the restaurant. Peeked inside and yes there was a huge Pono player.”

Ian Smith recently tweeted, “Server: We’re hoping Neil Young comes in. He has an open tab this month and gives good tips.’ I keep getting overzealous, trying to tell elaborate stories, but nobody is very responsive.”

A fan recently wrote to Neil on Neil Young Archives, “The first concert I saw of yours when I was 8 years old. It was at the Orpheum Theater in Boston on 12/06/07. It was one of my first ever concerts, but still to this day one of my absolute favorites. You had a painter alongside you making art out of each song you played. I was probably the youngest person in that venue and even though I got a beer spilled on me at the ripe age of 8, it was the best birthday present my dad could have ever given me. Following that concert I wrote a letter to you in red crayon and attempted to send it to Broken Arrow Ranch.

My dad and I spent some time trying to pinpoint your ranch’s exact address through Google Earth. I told myself that we did not get the address quite right since I never received a response. I am now 20 and finding out that I can actually write a direct note to you that you may read is the best news. I have thoroughly enjoyed the archives and being able to listen to your immense library of music. Thank you so much for all the tunes, the best concerts I have ever attended, and for being my longest standing favorite artist. You’ve been an inspiration. -Natalie.”

Neil responded, “Dear Natalie, Thanks for the story of your first concert. I don’t think I got your crayon message, but I’m getting it now! Lots of love, Neil.” Neil Young recently reacted to a nasty Gene Simmons and Paul Stanley revelation.

Happy birthday Neil Young. Four years ago I was in LA and I saw him eating dinner with Daryl Hannah. This was his car parked outside the restaurant. Peeked inside and yes there was a huge Pono player. pic.twitter.com/RFPPkvPFWi