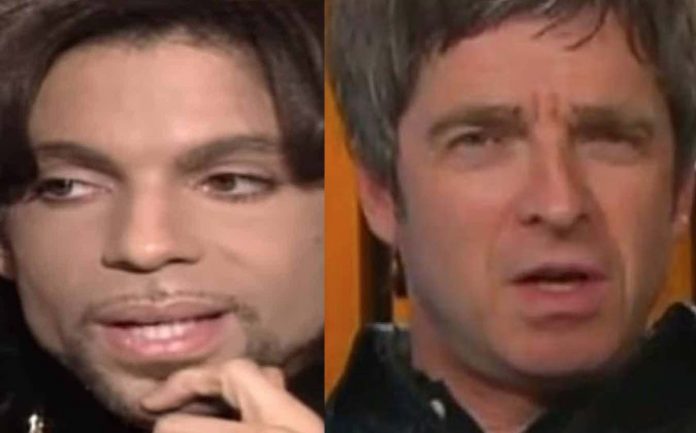 Oasis legend Noel Gallagher was recently interviewed by Zane Lowe on Apple Music’s Beats 1 to talk about a multitude of subject matters. Here, the iconic Gallagher brother divulges on how he once no showed the second part of his concert to see Prince – during the first night of his tour no less! Smashing Pumpkins’ D’arcy responded to Noel Gallagher insult this past Summer.
Gallagher explains: “It was the first night of my tour and I was playing about half an hour up the road and I was supposed to play for an hour and a half and it got to an hour and I said to the crowd, I’m sorry to do this right. But Prince is going on stage in half an hour, right. And I’m not f**king missing that gig for anything. So there was kind of a little bit of a pause where people thought, Oh, is he joking?…Until the f**king lights came on, I’d gone, I was in the car and gone. And then people from the gig were calling saying, yeah, that didn’t go down too well. I was like f**k, it’s f**king Prince, what are you talking about?”
In other news regarding Noel Gallagher, fans of the Gallagher brother took to the Oasis subreddit to discuss Noel’s latest single ‘Wandering Eye’ which was recently released. Greta Van Fleet revealed earlier this year if they hate each other like Oasis.
Mitchrw74 wrote: “I’m not digging it, to be honest, just missing something for me. The same with Sail On, can’t get into it. There just seems a smarminess to them. Not saying that one I won’t dig them, like some of the Big O tunes (I Hope, I Think, I Know – Roll with It – Songbird – The Hindu Times) but it’s not on my playlist (not that Noel will be giving a **** haha!)”
Mekju905 responded: “Is this being released as a Christmas song? On first listen, I’m not sure all the lyrics. It sounds more like Noel classic, but much softer. Not a bad tune, but doesn’t have the typical hook that makes Noel’s songs special.”