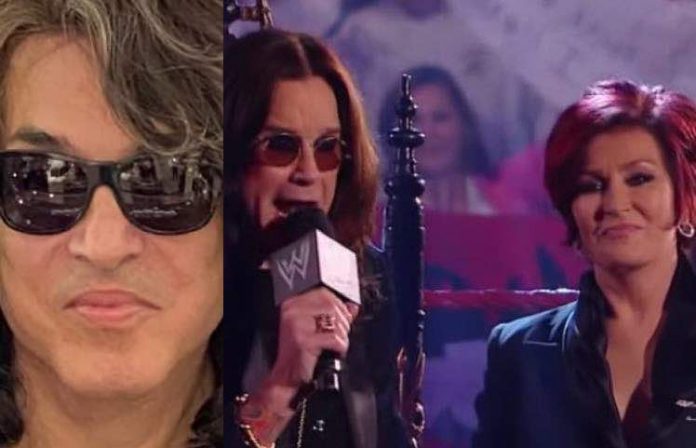 Acclaimed Kiss frontman, Paul Stanley and Ozzy Osbourne’s wife, Sharon Osbourne had this little chat in which they discussed the first time the ever interacted with each other, bumping into each other while doing non-celebrity things as well as their overall friendship. Alternative Nation transcribed their comments. Paul Stanley confirmed his ‘last’ KISS concert.

Paul Stanley: What I love is that even when I don’t get to see Sharon, I can follow what she’s doing. Anything that she does that is good makes me happy and when there are things going on with her happy makes me worry. The first thing we talked about today was how Jack was, how Ozzy was and that’s the most important thing.

Sharon Osbourne: Yeah, I mean, crazy like we will bump into each other at the grocery store and we’ll be like: “what are we doing?”

Osbourne: We’re doing normal things! Like, the first time I think we ever really had a conversation was at Live Aid.

Osbourne: It was at Live Aid in Philadelphia and I can remember going up and we were talking, hanging out and ever since then I just kinda felt that he [Paul Stanley]’s such a great guy to talk to and such a great guy to have as a friend. Like you cannot see each other for a couple of years, three even and when you do you just pick right back up again.

KISS icon Paul Stanley looks ‘miserable’ in train station photo. Kiss fans reacted to the two’s chat via the Kiss fan forum – Kissfaq. One forum member, Andreww1962 stated: “The only thing I have against Sharon is that she had the original drummers and bass players removed and replaced from Ozzy’s back catalog so that she would no longer have to pay them royalties. Then she cut Bill Ward out of the Sabbath reunion, Bitch with a capital B.”

Whereas GeneSemens put: “I have two friends that love Sharon because when they were kids (probably around 12ish), they went to Ozzfest and were standing near some barricades. Sharon saw them, walked over, grabbed them by the hands and said: “come with me.” Then she walked them backstage and introduced them to Sabbath.” Paul Stanley ‘lonely’ KISS meet & greet photo revealed.