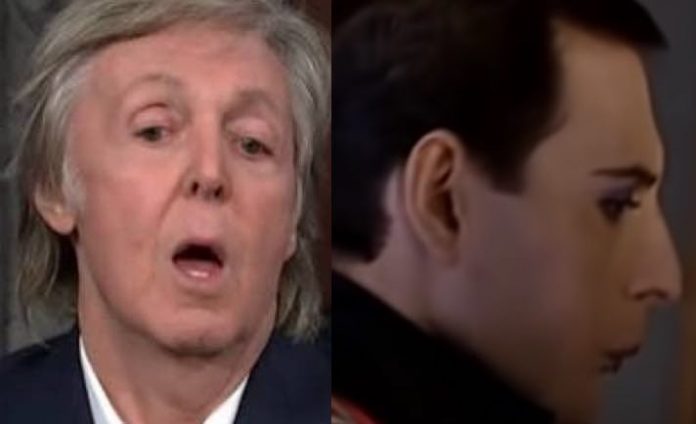 This newly unearthed video from Live Aid features Freddie Mercury, who around the same time was diagnosed with AIDS, along with U2 frontman Bono and the Beatles co-founder Paul McCartney. At the end of the historic benefit show, all the artists came to sing ‘Do They Know It’s Christmas Time’ which you can see the three legends taking part in below. This video is the last time they were filmed together. Freddie Mercury ‘terminal cancer’ from AIDS revealed.

Fans recently took to the Beatles subreddit to react to this clip. VRGator wrote: “Live Aid was amazing. I was stuck in front of the tv all day long. One of my favorite parts was when Paul was singing Let It Be, the microphone cut out so the crowd picked up the singing. Then the microphone came back on so he sang the last part again and the crowd went nuts!” In response to that comment, delinthefelon stated: “Yes I saw that I might just go watch Queen and Paul’s performance for live aid. I wonder why Queen didn’t perform Under Pressure live with Bowie, considering that he was there.” Freddie Mercury caught with bandmate girlfriend in bad video.

Whereas sgriobhadair commented: “They didn’t really know each other. It wasn’t until after Live Aid that they became friends. The Wikipedia article on Paul’s song, “Once Upon a Long Ago,” has this to say about their relationship. “Originally it was intended that this song [Once Upon a Long Ago] would be a duet between McCartney and Freddie Mercury. The two had known each other only casually: Mercury was a fan of Buddy Holly and would occasionally attend McCartney’s Holly inspired events over the years. However, they become friends properly following socializing that took place after Live Aid. McCartney (who had a lot of sympathy for Mercury due to the press stalking him for stories about his health) wrote the song with Mercury in mind. Mercury, however, was inundated with work, both solo and with Queen and was also, at this point, in the advanced stages of his battle with AIDS and an understanding but saddened McCartney continued the project without him. However McCartney’s pitch, phrasing, and key on the finished track are all very similar to the guide vocal demo he created for Mercury when he was attached to the project. Linda McCartney revealed that Paul was devastated by Mercury’s death when she appeared alone on British TV a few days after Mercury died.” Michael Jackson’s daughter makes creepy Freddie Mercury claim.