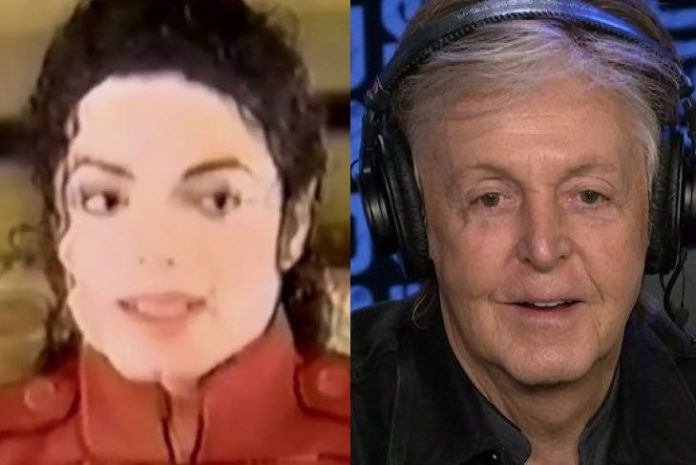 Paul McCartney was spotted with Michael Jackson’s sister in a rare photo! The Twitter account @HistoryLoversClub, which specializes in posting rare, historical photos posted the following vintage photo of iconic vocalist for The Beatles, Paul McCartney, the late “King of Pop”, Michael Jackson and his sister LaToya Jackson on the set of the video for “Say, Say, Say.” Paul McCartney wrote this heartbreaking goodbye note recently. The track was produced by George Martin for McCartney’s album, Pipes of Peace. The song was recorded during production of McCartney’s 1982 Tug of War album, about a year before the release of “The Girl Is Mine”, the pair’s first duet from Jackson’s album. It was certified gold in 1983. Paul McCartney revealed if Ringo Starr played a real role in songwriting with The Beatles not too long ago. The picture can be viewed below:

With the fiftieth anniversary of The Beatles masterclass – Abbey Road, fans on The Beatles sub-Reddit have been discussing their thoughts about the newly released reissue.

This Paul McCartney horrible The Beatles paycheck revealed was just revealed. Lincoln_Wolf proclaimed: “I would like to say that that the 2019 Come Together remix is better than 2009 one. It’s clearer and has the parts much better placed. That being said, there are two things that annoy me:

In the end, where they’re playing the intro but with added synth, the synth seems to slide in too abruptly every single time. In the 2009 mix/original, the synth slides naturally and sounds more natural too. The 2019 remix does have the synth a tad louder which might be the problem. It goes up in volume as it enters but quick and, I think, gives the illusion of it coming in abruptly.

As the song begins it’s fade, at around 3:50 you begin to hear other John vocals that are not present in the 2009/original mix. You start to hear an “oh” and then another “come together” and then some moaning from John and then you even hear some sort of laughing or “hee hee” from Paul (I think it’s Paul) in the last second of the song. I HATE IT. All of this uncovered vocal from John is layered over the vocals that were already present in the mix. At this point in the song, John lets out a soft tired grown which serves as a way to signal the end of this song. But now we have a “come together” over the groan as well accompanied by some more moaning and groaning and it’s terrible! In addition, when the songs are just a couple seconds from ending and you’re about to hear the last soft falsetto “yeah” from Paul you hear a groan right before it and a “come together hee hee” right after it and it ruins the whole thing! The ending is supposed to be simple but now all this gibberish is layered over it and it’s a mess. I might be overreacting as it’s like the last 30 seconds but still, you can’t be adding in stuff to something that was already perfect. In the White Album remix, certain things that barely audible in the original mix were brought closer to the listener but in Come Together these John vocals aren’t even in barely audible, they’re just not there and for a good reason: it didn’t sound good.

Ok, that’s my rant. Hopefully, there aren’t any more surprises like these (#2) in the rest of the songs.”