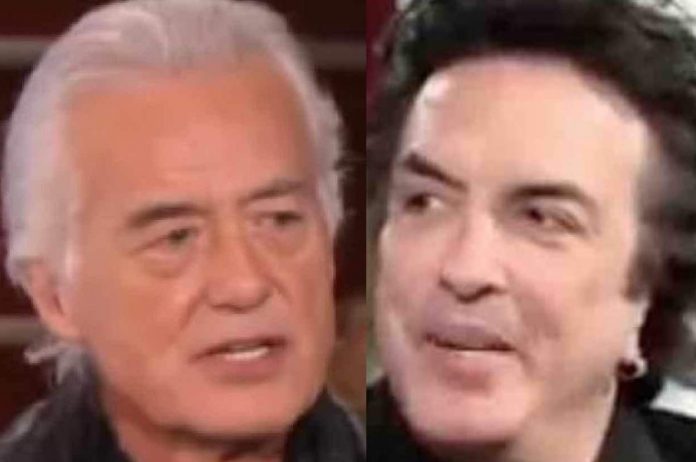 Paul Stanley, the iconic rhythm guitarist and co-lead vocalist of the rock band KISS took to social media via Twitter to reveal that he was “hanging out with Jimmy Page.” However, Stanley was doing so in the form of the arts! Yes, that is right, the legendary KISS member unveiled that he painted this painting of the famed Led Zeppelin guitarist. Paul Stanley grabbed this young A-list actress in a recent photo.

Musicians who paint as a hobby is certainly nothing new as A-list singers from David Bowie, The Rolling Stones member Ronnie Wood to even  Marilyn Manson have taken up the hobby. We will let you, the reader decide where the man that they call “The Starchild”, ranks. You can view it below. This recent Paul Stanley ‘horrifying’ photo surprises KISS fans.

KISS fans discussed what the best album from KISS’s early years was on the group’s subreddit.

Sportsaint3 replied: “Hotter than Hell hands down. It has quality songs (Yes, Going Blind), and the recording quality actually enhances the material. I love all the songs on this album. KISS has a couple of covers that should have been left off, but the original material and production are stellar. I also love Dressed to Kill. But this is when I was first introduced to KISS so the early music is what does it for me!”

Joshschmitton stated: “Purely from a material perspective, it’s the first album. However, while the production is clean sounding, it’s also not very rock sounding. In a lot of ways, it reminds me of the type of production you’d hear out of the late 60s. Especially the drums and the rhythm guitar. Ace’s lead sound is good though.

I actually think the only truly great Kiss album is Alive. It’s got the material, the energy, and the production. All of the other albums from 73 to 79 lack in some way, even Destroyer. But I enjoy them all.” Paul Stanley was caught watching this gross video by KISS fans earlier this month.