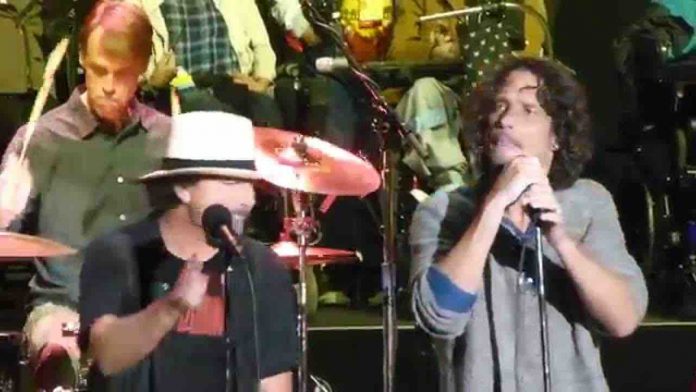 Pearl Jam and Soundgarden drummer Matt Cameron has linked to a page called ‘We Stand With Soundgarden’ featuring a photo of Matt wearing a ‘f**k you’ t-shirt. The page appears to have been launched in reaction to Chris Cornell’s widow Vicky suing Soundgarden.

Cameron claimed last week that he had been blocked from the official Chris Cornell Instagram account, which is under the control of Vicky Cornell. He also claimed Soundgarden don’t have access to their Instagram account, and Eddie Vedder’s wife Jill also posted a Cher song video that some fans saw as a shot at Vicky. Vicky Cornell later indirectly responded to Cameron and Vedder’s remarks on her own social media account.

Vicky wrote to a fan on Instagram earlier this week that the lawsuit against Soundgarden is ‘absolutely not about money, you are making it that because you don’t want to hear the truth. It’s too easy – rockstar’s widow and the money, it’s such a cliche. I have a question though, why am I guilty of spending money but other rock star wives can spend money on Chanel and Dior and fly private? Hypocrisy at its best, or are they entitled because their husbands are alive?”