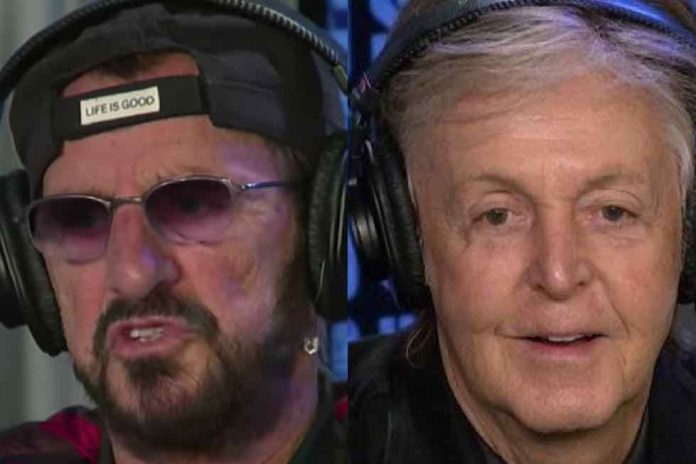 The Beatles official Twitter account tweeted out the following Ringo Starr quote. The quote is actually a line from an old interview that Starr gave detailing the process behind one of the ‘Fab Four’s’ most signature hits. Here, Starr reveals the process behind ‘Helter Skelter which was written back in 1968 and was a trademark track on the group’s self-titled album, affectionately referred to as ‘The White Album’.Ringo Starr recently revealed why Paul McCartney ‘ended’ The Beatles. Ringo discussed the ‘madness’ and hatred that McCartney unloaded on the song.

“‘Helter Skelter’ was a track we did in total madness and hysterics in the studio. Sometimes you just had to shake out the jams, and with that song – Paul’s bass line and my drums – Paul started screaming and shouting and made it up on the spot.” – Ringo

Paul McCartney wife reveals ‘miserable’ Ringo Starr photo. In other news regarding Ringo Starr and the Beatles – the fans can’t get enough of Starr’s latest effort, the recently released ‘What’s My Name’. One fan wrote: “Being a hardcore Beatles fan since the age of five (and that was in 1964, folks) and a very attentive fan of all of The Fabs solo work, I realize my opinion might be viewed as slightly prejudice. Although I have acquired all albums through the years I will be the first to admit that there have been the occasional ‘clinkers’ from each member. However, in my humble opinion, this newest release from Sir Starkey his best collection of songs offered to us in quite a few years.”