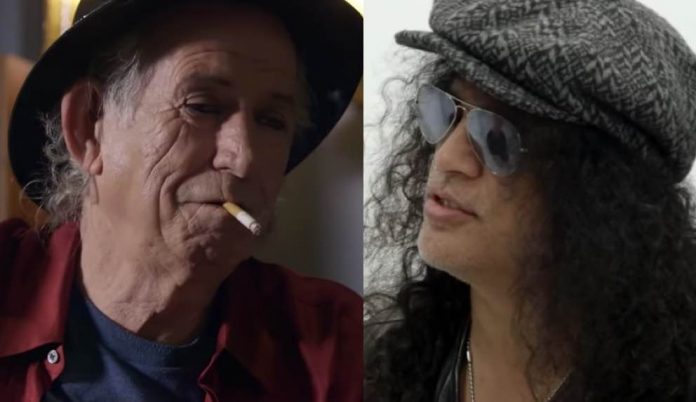 Guns N’ Roses guitarist Slash discussed a quote from The Rolling Stones guitarist Keith Richards about what ability he lost when he became a musician in a new Zeit interview. Below are translated quotes.

ZEIT ONLINE: But it also makes a big difference whether you listen to music or play.

Slash: Yes, that’s a different story. I think Keith Richards put it best when he said, “When you play an instrument, you lose the right to hear music properly.” As a musician, you hear from a much more subjective perspective.

ZEIT ONLINE: Can this bother? Maybe because you like a song but can not stand the sound of the guitar amp?

Slash: No, if I do not like something, it has nothing to do with playing the guitar. It would still affect me in the same way. But apart from that one analyzes music too much, of course. As a musician, you perform a musical autopsy on everything you sound like.

Slash: Definitely not for the latter variety. When I started playing the guitar when I was 14, I was mainly influenced by live albums. This was due to the fact that I had little money and was able to get an overview of the entire material of an artist with the purchase of a live LP on the cheapest way. But also the feeling and the tension of a concert seized me. That remained my center forever. I like to write songs, and I like to work in the studio, but for me it’s just a means to an end. I am not one who can meticulously deal with a song for a long time. I prefer spontaneity. What can be an advantage, but also a disadvantage.