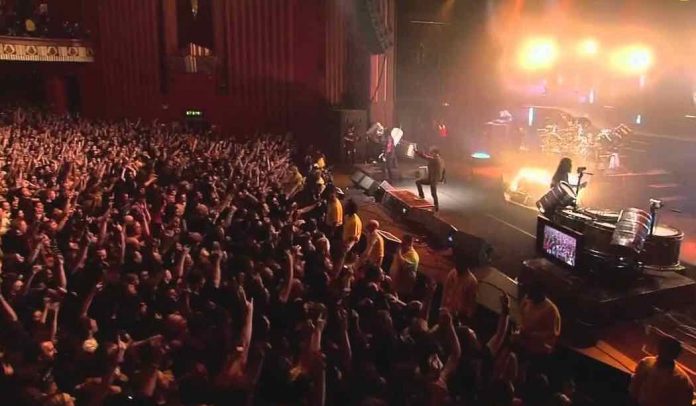 Slipknot‘s official subreddit recently posted this lost video of during the Gods of Metal tour in Italy from the year 2000. A Slipknot member revealed this brutal hospital photo. In the classic video in this Throwback Thursday story, Slipknot turntablist Sid Wilson is shown getting knocked out with a keg during the band’s set. This Slipknot icon’s crazy new haircut photo was revealed a few days ago, is he bald?

Speaking of the official subreddit for Slipknot, in other Slipknot news, fans on that very same subreddit have been speculating if the band is going to be slow to announce upcoming tour dates this time around.

u/nickyurbz got the ball rolling: “I feel like the guys are quick to announce multiple legs of tours. To me, the WANYK world tour seems to be taking off at a pretty slow pace. All we have is a cancelled AUS/NZ tour, sporadic dates in South America, and an impressive 2 month EU tour. I feel like in previous cycles, Slipknot would already have Another US arena leg, an EU/UK leg, an Asia/Aus leg, and a summer Europe/North America festival leg already announced and ready to go. Am I the only one that feels that this tour is off to a slow start?”

OmarRed0 chimed with: “I think the guys were just set on touring Australia heavy with Metallica. Probably didn’t think of announcing much after that. Now that the Australia tour is in the air, they’re probably scrambling tours to see what works best”

Friedntiedyed said: they’re making great money off the album and are getting older. Wouldn’t be surprised to see them play a few fewer shows here and there”

LettuceKetchupPod gave their best guess on what is going on: “My guess, along with Metallica canceling which fucked up their plans, is that they have shows lined up just not announced. Maybe securing openers or venues. Tours don’t just come together so I’m sure the powers that be are working on the next US leg and have been for a while.” This Slipknot member (was it Corey Taylor) admitted to buying a disgusting video not too long ago.