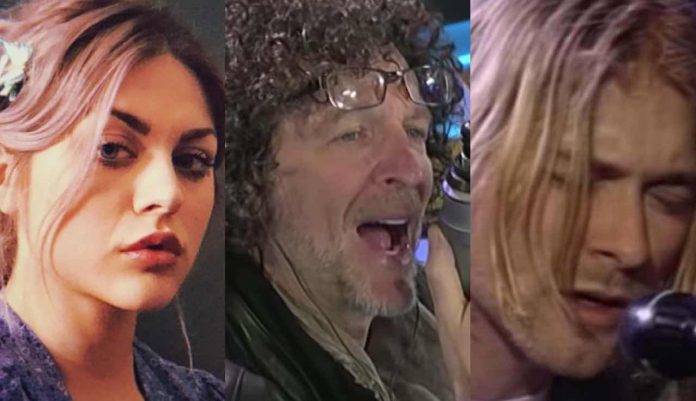 Howard Stern revealed that he frequently enjoys listening to the ‘Lithium’ station on his show recently, and he also looked back at Nirvana’s 2014 reunion performance, revealing that Gary ‘Baba Booey’ D’Ellabate from the Stern show left the performance early. Billy Corgan confirmed a surprising Nirvana performance recently.

MarksFriggin.com recapped: Gary said Nirvana was inducted. He said that was great. He said Joan Jett performed with Nirvana and they did ”Smells like Teen Spirit.” Lorde did one of their songs too. Howard asked how that was. Gary said he left right before she came on. He said it was 12:20am by the time she was coming on and he just had to get home. Kurt Cobain’s daughter tried to kiss a man in a new video.

Howard said he was watching their Birthday Bash special and John Mayer performing there. Howard said that he doesn’t know all of his music but he bought it all on iTunes. He said he was doing some stuff around the house and listening to his music.

Howard said he downloaded the John Mayer compilation and it was like 30 bucks. Howard said there is nowhere to sell a whole album now. He said the business is crazy. He said he should just come on the show. Howard said Gary should have yelled at him to come in and talk to him. Gary said he’s a really nice guy. Howard thanked Gary for the story and moved on. Howard Stern revealing what Tom Petty smoked before he died was detailed a few days ago.